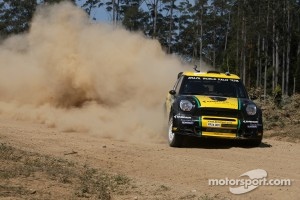 Daniel Oliveira and Fernando Mussano were one of the several crews which had trouble making their way through the first day in RACC Rally de España, 11th round of the FIA World Rally Championship, and after having removed a wheel from the MINI John Cooper Works WRC in the really tricky conditions on SS4, they were forced to abandon.

Today’s action underwent at the West of the base event in Salou, where all the stages are spread around more than 100km far from the Service Park. Daniel started this rally running on a very fast gravel road with a lot of loose gravel which made things really difficult for the hanging dust despite a three-minute gap between each car.

It turned out to be one of the worst beginnings for many of the drivers. Poor visibility and lack of grip forced Oliveira to slow down but he couldn’t avoid making a mistake that cost him more than 2 minutes. Nevertheless, he managed to make his way safely through a really tricky opening stage where some retirements were reported.

Sunny and dry conditions were far to be the ideal this time, although for SS2 a stiff breeze helped to clear the dust away from stage. However, some drivers still reported visibility issues.

Terra Alta speed test introduced a very long tarmac section which had to be tackled with Michelin gravel tyres as well as SS3, which featured 4.2 kilometres of narrow and twisty asphalt in between the gravel.

After the first loop Daniel reported that the car was moving so much but he still managed to set a good time on SS3. He was 0.7 secs faster than MINI John Cooper Works WRC privatee Armindo Araujo and missed Khalid Al Qassimi’s Ford pace by just 1.5sec. After that, he brought his car back to the Service Park in Salou placed 24th overall.

For the afternoon group of stages the organizers of the rally decided to give a four-minute gap between each car since the stages remained dry under a blue sky. On the other side, it was raining in Salou.

On SS4 most of the drivers reported that the visibility on the road was much better, although they still had to cope with really tricky slippery conditions. It was in that stage where Daniel slid off the road and damaged the car.

Back to the rally and tarmac. Daniel will be re-joining the rally under Super Rally system in the 34th position and it’s ready for the tarmac challenge that starts tomorrow. BWRT mechanics had a lot of work to do in the MINI John Cooper Works WRC to enable Oliveira continue in the rally. For tomorrow there are six stages scheduled, although the second leg is shorter than the first one, 143,54km. The action will start with a scary 45.97km speed test which turns out to be the longest one to be run on asphalt this season.

Daniel’s word. “It has been a really demanding day with very differing stages. At the beginning the hanging dust played a dirty trick on us but we could complete the first loop without major problems. When were back on the road we hit the rear wheel and could not do anything else to continue. Tomorrow we will try to climb in the overall classification and we will fight to end in the point zone.