The day started quite early after a long journey of more than 100 kilometres from Llandudno remote service to the Southern tip of the Snowdonia region where the crews spent this Friday tackling the classic Welsh forest stages. 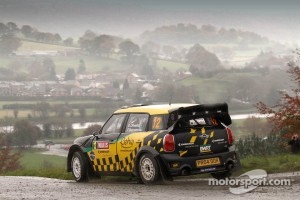 Daniel enjoyed a trouble-free run through the first group of stages which featured really demanding conditions with plenty of mud and fog. Amid these tricky conditions, Oliveira tried to set a safe and clean pace in the final outing of the season, he was able to climb three positions bringing his car to the Builth Wells service park placed 20th overall.

Wet conditions prevailed throughout the day under an overcast sky but rain didn’t set in until the afternoon stages. Nevertheless, it was already quiet muddy. For the repeated stages, after another 100 kilometres of liaison, the rain made the road even harder to drive. Visibility was reduced to some meters while the crews were tackling the last kilometres of this leg practically in the dark.

Brazil WRT crew members Daniel Oliveira and Fernando Mussano had to fight hard to complete the first leg of Wales Rally GB after a damaged suspension on SS10 made the MINI John Cooper Works WRC very hard to drive.

They showed great spirit and brought the car back to the Service Park in Builth Wells on time, despite very difficult conditions, and finally were able to leave behind a quite demanding day to settle 38th overall. The team made a great job leaving the car in top conditions for tomorrow’s leg.

Daniel Oliveira: “It’s been a really long and exhausting day. The second loop turned out to be hell. Rain was falling heavily, there was a lot mud and fog and in the last kilometres the visibility was really poor. On SS10 we damaged the suspension on a tight hairpin bend, altering the wheel alignment. This made it even more difficult to keep the car on the road through SS11 but finally we could reach the service where the team left the car in excellent conditions for tomorrow’s stages”.

Tomorrow’s route. On Saturday the action moves to the South. Hafren, Sweet Lamb and Myherin stages have been included in the last editions of this event although it is a whole new scenery for Oliveira and Mussano. The crews will once again contest two loops of these stages with a mid-day visit to the Service Park at Builth Wells.

Tomorrow the second leg starts and ends in Cardiff with the first car leaving the Parc Fermé at 6:00 (GTM) after an overnight halt in the Capital city. The drivers will cover 128,56 kilometres and the first special stage test kicks off at 9:28.

Ford has high and low moments in Wales Rally leg 2