Oliveira out of Wales Rally GB 3rd Leg
Daniel went off the road and lost more than 20 minutes. He re-joins tomorrow

The BWRT pair Daniel Oliveira and Fernando Mussano decided to retire from Wales Rally GB´s 3rd leg after he went off the road with only two stages remaining to complete another day of this 13th and final round of the 2011 FIA Wolrd Rally Championship. 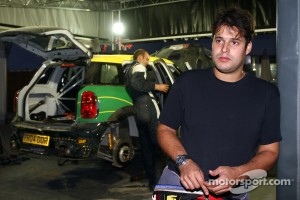 Oliveira suddenly lost control of his MINI John Cooper Works WRC and went off the road on SS15. He lost 21 minutes stuck on a ditch before being able to come back on the road. He completed the next stage, after which he and the team decided to do super rally for Sunday´s last leg .

Conditions were really different today from the ones drivers had to face in the last days as mid-Wales forest stages welcomed them with a bright, sunny and warm day . Nevertheless there were still many muddy and slippery sections after last night’s downpour and that made judging the grip levels difficult, especially on corners.

This new day of action started with the longest stage of this Wales Rally GB, SS12 Hafren (32.14km) followed by SS13 Sweet Lamb (4.01km) and SS14 Myherin (27.88km), all settled in the Upper Wye Valley with some demanding gradients, jumps and water splashes.

Oliveira and Mussano tackled these three stages with no major troubles and were able to bring the car back to the Service Park in Builth Wells in top condition. After covering 64,28 kilometres this morning the BWRT crew members climbed 8 positions to settle 30th overall.

For the repeated stages most of the drivers expected the breeze and warm conditions to help dry the stages for the afternoon’s loop , but conditions were really different. Oliveira was taken aback by the completely lack of grip and ended in the side of the road with no answers for what had happened.

Daniel’s word. “I don´t know what happened there (SS15), I suddenly lost control of the car and that was it. We got stuck on a ditch and lost 21 minutes , so It made no sense to continue since the car was behaving strangely and we still had a long stage and road section ahead before arriving to the Service Park”.

Tomorrow’s route. The final day of action on Sunday sees six more demanding forest stages including the Monument Power Stage with which this Wales Rally GB and this 2011 FIA World Rally Championship season will come to an end.

Tomorrow’s itinerary comprises of two loops of three stages each using a mix of gravel and asphalt roads and split by a visit to the Service Park in Builth Wells. The drivers will cover the last 86,48 kilometres of the rally hoping to be in the finish podium in Cardiff to see the season off.