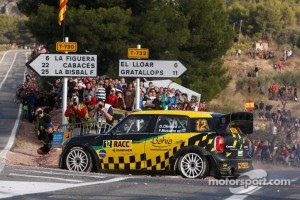 The Portuguese co-driver made a full recovery from the accident they had in France.

BWRT and Daniel Oliveira are already working for the 2012 season of the FIA World Rally Championship and the first step the Brazilian squad and his young driver took before this 2011 comes to an end was to confirm Carlos Magalhaes as Oliveira’s co-driver.

The Portuguese navigator was Daniel’s regular partner since BWRT broke into the WRC arena in Rally de Portugal in March, but he missed the final two rounds of the season after the pair had an accident in Rallye de France’s second leg which cost Magalhaes two broken ribs.

Now Carlos is fully recovered and ready to start a new season partnering Daniel once more.

“I’m really happy that Carlos was able to make a full recovery from the crash we had in France. It was really hard for him not being able to join me for the last two rounds, but the doctors and everyone within the team concurred it was the best for him” said Daniel.

For Spain and Great Britain’s round Oliveira lent towards his Argentinean fellow Fernando Mussano to replace Magalhaes, although Carlos was always involved with the team’s issues and joined the squad to help Daniel and Fernando in the final two outings.

BWRT is negotiating to continue in competition within WRC for 2012 and expects to announce his plans for next season as soon as possible.