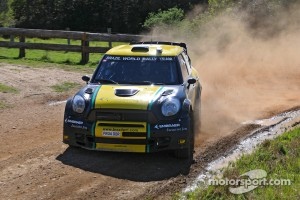 Brazil WRT’s Daniel Oliveira and Fernando Mussano made their way through the opening leg in Wales Rally GB after completing the first three stages of this 13th and final round of the 2011 FIA World Rally Championship. The South American pair had no major trouble and placed the MINI John Cooper Works WRC 23th overall.

The action kicked off with two runs in the famous and historical Great Orme stage, a section which was used 30 years ago for the last time and which featured a 4,74km of twisty tarmac on a seaside road near North Wales coastal resort of Llandudno, 200km away from Cardiff.

The Orme -as the prominent limestone headland which name after the stage is also well known- welcomed Oliveira and the rest of the drivers with a clear sky and a mild autumn temperature of 18ºC after the adverse conditions they had to face on yesterday’s shakedown at Builth Wells’s Service Park Showground.

But much of the water that fell during the night had no time to dry up and because of that many sections were damp in the two opening stages. Road conditions were really slippery and the lack of grip was even worst since the drivers had to negotiate every corner with the Michelin gravel tyres.

And to add more excitement to this really treacherous start the drivers had to keep an eye on the pavement wall on one of the sides of the road, whereas on the other side there was nothing but a long way down to the sea.

Oliveira cleared safely this tricky start and tried not to take any major risk before heading to the Clocaenog forestry complex located to the West of Ruthin to tackle the last stage of this short but intensive first day of competition in Wales.

Already running on gravel it wasn’t easy for Daniel to go through SS3 since there was a lot of mud on the corners and it became more slippery for every car that went through the stage. Also in the sections featuring pine lines at both sides of road he had to drive in dark and misty conditions which was another learning curve for Oliveira in his first time rallying this event.

Daniel’s word. “It was a tricky start and we didn’t try to make nothing heroic but keeping the car as steady as possible. We were using gravel tyres and it was really easy to make mistakes. During the first metres in the Great Orme stage we enjoyed a good grip but then it turned out to be quite slippery. We also tried to take things cool on SS3 since there were a lot of mud and the visibility was really low. Tomorrow it will be a long day and we are happy to start this rally in this way.

Heading South. Once completed this first section there was a 15-minute remove service in Llandudno where there will also be an overnight halt. Tomorrow the drivers will head 108km to the South to spend Friday in the classic Welsh forest stages. They will be completing two loops of four stages separated by a visit to the main Service Park at Builth Wells after driving another hundred kilometres. They will be covering 116,18km and at the end of the day the will have another long journey to Cardiff where another overnight halt will be awaiting for them.