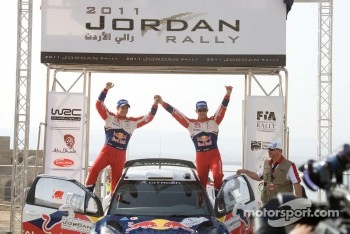 The Citroen Total World Rally Team driver came back from a 0.5 second deficit to Ford rival Jari-Matti Latvala on the final stage, winning the Jordan Rally by 0.2 seconds - the narrowest victory margin in WRC history.

Ogier started the final day with a 31.6 second lead but facing the disadvantage of running first on the road, a task that had left Ford’s Mikko Hirvonen trailing by over two minutes after the first day’s stages. Hirvonen’s BP Ford Abu Dhabi team-mate Jari-Matti Latvala pushed his Fiesta RS WRC to the very limit to overturn the gap, passing Sebastien Loeb in the morning and finally breaking Ogier’s lead on the penultimate stage.

“Incredible,” said Ogier. “An incredible day. I had to push like hell today. It’s an amazing feeling. Jari-Matti was so fast today and I had to drive flat out. I’m so happy to end like this.”

Ogier’s remarkable time of 5m21.720s on the Power Stage was just four hundredths of a second faster than Hirvonen, who had preserved his tyres for a final push to secure maximum bonus points, knowing that he was too far away from the leaders to challenge them.

“We were full on it but I definitely gave it the best shot I had,” said Hirvonen, who takes two bonus points to add to his fourth place overall. “I’m a little bit disappointed with the overall result because yesterday I struggled, but today was better.”

Ogier’s team-mate Sebastien Loeb seemed to have settled for third place overall after suffering from oversteer throughout the day. As usual, though, he had something extra in reserve for the Power Stage but fell just 0.3 seconds short.

“I did a big mistake near the end of the stage,” said Loeb. “I went completely wide in the sand and it felt like I lost two seconds.”

Loeb’s third place finish, coupled with third place on the power stage, moves him into the championship lead with 74 points to Hirvonen’s 72.

Latvala dropped time in the middle of the final stage and at one point was 4.5 seconds down on his team-mate’s benchmark time. An enormous push over the closing kilometres brought him to 0.7 seconds away from the leaders, but it was not quite enough to hold on to his overall lead.

“I pushed very hard and if I lose I can be satisfied with second place,” Latvala said at the end of his run. “I pushed as much as I can.”

Ogier’s maximum points haul means he moves ahead of Latvala in the championship, lying third behind Hirvonen on 69 points with Latvala on 66.

The four-way fight for the win between Ogier, Latvala, Loeb and Petter Solberg had become a three-way fight on SS17. “About two kilometres into the stage, we had a major spin and just went off the road and got stuck,” said Solberg. “There were some really big rocks there, and we were not able to get the car back on the stage and continue.”

Fifth place overall fell to the M-Sport Stobart Ford Fiesta RS WRC of Matthew Wilson, who had been battling with ex-Formula 1 driver Kimi Raikkonen throughout the event. A puncture early in SS19 dropped Raikkonen out of the equation, which came as a relief to Wilson.

“Something happened after service,” he said. “Maybe we lost a little preload from the rear diff. Even on the straight I can’t keep it in a straight line, but we got a bit of luck to finish fifth. We’ve learned a lot again about the car.”

“We wanted to push a bit harder after the first gravel rally,” said Raikkonen. “From the driving side this is probably one of my best and most consistent rallies so I’m happy with that.”

Wilson and Raikkonen lie seventh and eighth in the championship, separated by four points.

Federico Villagra took seventh place, the best finish of the year for the Munchis Ford World Rally Team driver. Despite some worries about oil temperature he defended his position from the Fiesta RS WRC of Khalid Al Qassimi, who in finishing eighth took his best placing in this event since it became part of the WRC calendar.

Al Qassimi slipped to 25 seconds behind Villagra over the final stage but he retained a comfortable gap of 4m43.8s to ninth-placed Dennis Kuipers.

Bernardo Sousa took SWRC honours as well as scoring a championship point by finishing tenth overall. In the final stage he was nursing a suspension problem.

“In the end it was okay,” said Sousa. “We were pushing a lot be we kept it on the road. In the left-hand corners we had to be cautious not to put too much pressure on the shock. I’m delighted with this win.”

Jordan Rally Goes To Ogier In Two Blinks Of An Eye