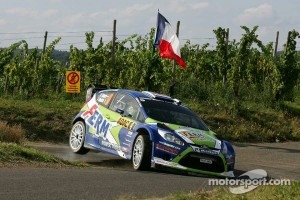 After several successful stage times during the Hellendoorn Rally, Dennis Kuipers will travel full of confidence to Rallye de France Alsace. Together with Belgian co-driver Frederic Miclotte he will start the mixed asphalt rally in the Ford Fiesta RS WRC.

"The roads look like the German Eifel but are also very similar to a Dutch or Belgian rally," said Kuipers.

In preparation for the second rally on asphalt Kuipers completed a successful two-day test with the FERM Power Tools World Rally Team in France. “I've optimized the setting and the car feels better now than in Germany,” said Kuipers.

The adjustments were immediately brought into practice during the Hellendoorn Rally. During the toughest rally in the Netherlands, Kuipers and Miclotte recorded an impressive eight stage wins. “This was not just for fun or for the Dutch fans to see the Ford Fiesta RS WRC, but also a nice preparation for the French rally.”

A technical problem in the closing stages prevented a good result. “It does not change the fact that we have a lot of confidence. We want to continue in France in the same way,” said Kuipers. “The roads may look like the German Eifel but are again very similar to the Dutch or Belgian asphalt rallies - this suits us fine,” he said

The weather is an important factor in France. “You have to cut deep and this can throw sand on the road. When it rains, it turns into mud which makes the roads slippery. We are ready for these conditions,” explains Miclotte.

The FERM World Rally Team is giving fans an amazing opportunity to create the livery of the team’s Ford Fiesta RS WRC for Wales Rally GB. Dennis Kuipers will pilot the car in the winning livery. The winner will also be a special guest during the final round of the WRC. The winning design will also come back as one of the cars in the official WRC game! It is a huge opportunity to show an individual’s creative skills to a worldwide audience. For more information on how to participate please visit wrcthegame.com or fermwrt.com. The Draw 'n' Race competition runs until 9/10/2011.

Volkswagen with large line-up at WRC home round