Fernando Mussano to be Daniel Oliveira's co-driver in Spain 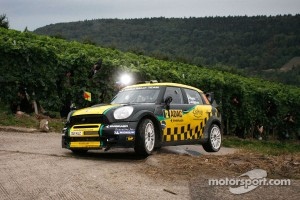 Daniel Oliveira will introduce a new co-driver into the FIA World Rally Championship top-class when he takes part in Rally of Spain alongside Fernando Mussano next week.

The Argentinean co-driver will be replacing Carlos Magalhaes who is recovering from the accident the BWRT’s pair had in France less than two weeks ago and which cost the Portuguese two broken ribs.

Although Magalhaes had the willingness to be on board the MINI John Cooper Works WRC for the 12th round of the WRC in agreement with the doctors the team decided to give him a rest to get completely recovered.

This news means Daniel will be getting together once again with his former co-driver with whom he competed in the Argentinean Rally Championship in 2009. The last rally they were together was Rally Vuelta de la Manzana, one of the most traditional rounds in South America.

This will be the first time for Mussano to be on board a WRC car. Mussano has already earned some experience within the World Rally Championship. This year Fernando entered three rounds of the WRC Academy (Portugal, Sardinia and Finland) with his fellow countryman Miguel Baldoni.

“I’m really happy to join Daniel once again, I’ve got great memories of the time we spent rallying together in Argentina. As soon as he called me to replace Carlos I accepted the offer immediately. This is a great opportunity for me”.

“I have been talking with Daniel a lot during the last few days so as to start preparing all the details for Rally of Spain. I’m flying tomorrow (Wednesday) to Brazil and then to Europe. On Saturday we will undergo a training programme while on Sunday we will have the chance to test the MINI John Cooper Works WRC”.