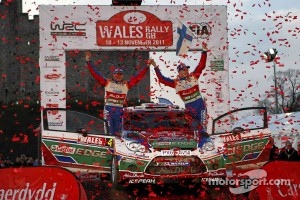 The success of the Fiesta RS WRC on this 13th round of the season mirrored the car’s triumphant debut in Sweden in February, when team-mates Mikko Hirvonen and Jarmo Lehtinen headed a similar podium clean sweep.

Heavy rain turned the gravel forest tracks into a muddy mess. Grip was at a premium during the opening two days, before brighter weather generated better conditions for the final two legs. The event covered the length of Wales and after starting at Llandudno in the north on Thursday afternoon, competitors tackled 353.53km of competition before this afternoon’s finish in Cardiff in the south.

Latvala felt unwell during the first full day of competition, but as his health improved so did his pace and he ended the leg just 1.1sec from the lead after a thrilling duel with Frenchman Sébastien Loeb. The 26-year-old moved ahead yesterday afternoon but a slender 6.1sec advantage meant there was still everything to fight for during today’s final six special stages, covering 84.04km in the Brecon Beacon mountains and over the Epynt military ranges.

Latvala widened his lead during the opening stage, but when Loeb was forced to retire the Ford Abu Dhabi driver measured his pace over the remaining tests. Nevertheless, he won two more stages en route to the finish at Cardiff Castle.

“It’s a great way to end the season,” he admitted. “It has been a long time since my last win and I’ve endured some frustrating times since then, but they’re now over. “Everything came together during the second half of the season and I’m so pleased to win here. It’s my 10th Rally GB and it’s the rally where I began my WRC career in 2002, so it feels like a home event for me.

“When Seb retired this morning the pressure lifted from my shoulders. I eased my pace and didn’t take any risks, although the change from driving flat out to driving more cautiously was tricky. But I found the right rhythm and kept my concentration, which isn’t easy when you’re not driving on the limit. The team did a great job all year and this was a brilliant way to close the season,” he added.

Latvala also won the Abu Dhabi Spirit of the Rally Award in recognition of his performance.

Team-mates Evgeny Novikov and Denis Giraudet finished seventh in another Fiesta RS WRC in their debut for the Ford Abu Dhabi squad. “Conditions were really tricky during the first part of the rally and I decided to set my target on simply finishing. Despite a few problems I did that and I’m happy to have made it without the dramas that some drivers encountered,” admitted the Russian driver.

“Jari-Matti was a class act throughout the weekend. He had some pressure during the first morning when he wasn’t relaxed but after that he was in great shape and nobody had an answer to his speed. We started the rally hoping for a world title. Sadly that wasn’t to be, but a victory, a clean sweep of the podium and eight Fiesta RS WRCs in the first nine places was a great consolation,” he said.

Ford of Europe motorsport chief Gerard Quinn said: “We had a tough season and to come here and lose Mikko so early was a bitter disappointment. However, we bounced back and Jari-Matti showed his improved form with a thoroughly deserved victory. I’m delighted for him considering the superb role he played in supporting Mikko in recent rallies. He is a true team player.

“The Fiesta RS WRC took a 1-2-3 and it’s fitting the car ended the season in the same way it started, by locking out the podium places. My congratulations also go to Craig Breen and Gareth Roberts who won the FIA WRC Academy Cup title yesterday in a Fiesta R2,” added Quinn.