Salou, 23rd October, 2011. The MINI WRC Team was in a celebratory mood at the end of Rally RACC – Rally of Spain. Not only did Dani Sordo (ES) and Carlos del Barrio (ES) and Kris Meeke (GB) and Paul Nagle (IR) finish fourth and fifth respectively, but the MINI John Cooper Works WRCs were also first and second fastest on the Power Stage. While it was Sordo’s home event, it was Meeke who took the honour and the three points for being fastest on this final stage. This was the first WRC stage win for the Northern Irish driver and, in fact, he has now scored his first ever WRC points. 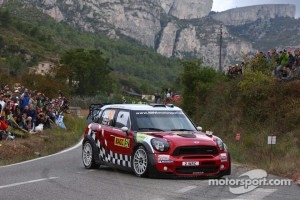 The result was helped by an inspired tyre choice at the start of the day. The team’s weather forecast showed rain was expected later in the day, and so they chose to ignore what the other works teams were doing and opt for the appropriate Michelin tyres. Both cars left Salou after the mid-morning halt with two soft tyres on the right hand side, two hard tyres on the left hand side and two soft spares. This proved difficult for the drivers on the two long tarmac stages which were held in the dry, but as the first cars arrived at the final Coll de la Teixeta stage the promised rain came. This was vital and gave Meeke the fastest time, Sordo the second and the customer MINI of Daniel Oliveira the fourth. Third quickest was Sébastien Loeb (FR) who assured Citroen of the 2011 Manufacturers’ title.

Dave Wilcock, Technical Director:
“Obviously we started the day wanting to maintain our positions and keep Sébastian Ogier behind us. On the morning loop Dani picked up a puncture in one of the stages, and that cost 25 seconds so was really close. On the second loop all the weather forecast were showing various options, and it was a matter of which one you chose to believe. When the cars left no one had any idea what the other teams were running in terms of tyre strategy. Our call at the time was it was going to rain halfway through the second stage of the loop, so we took what we considered at the time a safer option and we went for four soft and two hard. We had the wrong tyres for the first stage, and then realised Ford had taken five hard tyres and Citroen four hard and two soft. They believed it was going to stay dry. After the first stage we took a big hit on time, as we were clearly on the wrong tyres. Going into the second stage Ogier’s engine let go, which was fortunate. Then fortunately our weather forecast came true and the power stage had rain just prior to the stage start. We were on the right tyre at the right time. We were one or two by a country mile. We just picked up and extra five points for the drivers in that stage. Credit has to go to Michelin for the durable tyre, because even with the soft tyre on the drying stages it was not that bad. Impressive as ever.”

Dani Sordo (MINI John Cooper Works WRC No 37):
“It is okay to be fourth, but we lost a lot on the first day on the gravel stages and with the dust. We had hoped the rain would have come a little bit earlier today. For the first two stages we had the wrong tyres and the others had the right ones, then in the final stage we had the right ones. It was fun and a little bit slippery in some places. I am quite okay, but not totally happy as I really wanted to finish on the podium on my home rally, but it didn’t happen this time.”

Kris Meeke (MINI John Cooper Works WRC No 52):
"That was the perfect end to this rally for me. I knew we had made a good start to the stage, but then knew I had messed up on the last roundabout. I had a quiet word with my engineer, Teena (Gade), in service before the last loop and she was saying just get it home as we will be happy with a finish now. I was so frustrated and wanted to go fast, as I loved the power stage the first time through. To be quicker than Dani on the same tyres on his home patch is something pretty special. Over the whole rally I don’t have the experience to compete with the other guys yet, but this shows that when I know where we are going we can be with them."