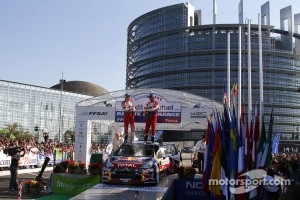 The World Rally Championship’s trial of live internet streaming from Rallye de France Alsace earlier this month proved such a hit with fans and teams that it could pave the way for similar coverage of some or all of the WRC’s 13 rounds in 2012.

Fourteen hours of live action, captured by two helicopters and onboard cameras, plus service park footage and interviews, was available to view free of charge on a media player on the championship’s official website, wrc.com , as part of a pilot project to investigate future digital opportunities for the FIA-governed series.

The exercise was also the first test of a new partnership between WRC promoter North One Sport and end-to-end streaming specialists, Streamworks.

Despite the enormous technical challenge of capturing live footage from cars as they sped through the mountainous Alsace region the experiment ran largely without a hitch, with tens of thousands of WRC fans logging on to watch the action.

A survey of wrc.com users who viewed the streaming found that 82.5 per cent wanted to watch live stage coverage on the internet. The results also underlined the sport’s worldwide appeal with online viewers from 66 different countries. The most popular were Finland (23.8 per cent), France (20.8 per cent), Spain (17.1 per cent), Germany (10.2 per cent), Poland (7.0 per cent) and United Kingdom (6.91 per cent).

The pilot project also proved a big hit with WRC team bosses. “It’s been fantastic and the quality has been superb,” said Ford team principal Malcolm Wilson. “For a first attempt it’s been very good and will take rallying to a different level.” David Richards, who oversees the factory MINI team, added: “When it’s properly up and running it will be a great product for the future. If it’s an indication of what’s to come then it’s superb.”

After a technical review and an analysis of feedback from wrc.com users and industry stakeholders, North One Sport CEO Simon Long said he hoped to offer more live coverage in the future. “The aim of the trial was to determine the technical feasibility of live WRC streaming and to gauge demand from fans. The results in both areas are extremely encouraging. The challenge now is to provide more live coverage from next year.”

Elsewhere on the internet the WRC continues to gain ground with wrc.com monthly page views averaging 10.26 million for the period January-June 2011 compared to 6.98 million in the same period last year. Meanwhile on 29 September the number of fans on the official WRC Facebook page reached half a million.

“The internet gives us an unparalleled opportunity to broaden the reach of the WRC beyond our existing broadcast audience and to provide fans with more content and more variety,” added Long. “The trial was a vital stage in our development plans for the next 12 months.”