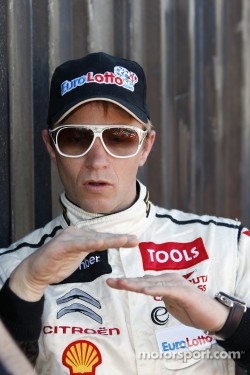 Driving a Citroen DS3 WRC prepared by his own PS Engineering team, Solberg and co-driver Chris Patterson set a quickest time of 1m15.1s over the 2.05-kilometre practice stage, which was held in hot and sunny conditions 7km north of the service park on the Dead Sea coast. The shakedown was run to a shorter than usual timetable owing to the delays encountered in shipping the cars, spares and service park to the Jordan Rally location.

Solberg, who came into the event with no experience of the revised Michelin tyres, said: “It was tough to be here without having had a chance to do anything with the new tyres, because there’s quite a big difference. But we had no choice so we just did the best we could. I’ve learned much more about the tyres now with the few runs we had and I’m ready to start the fight.

“I have to go flat out in every stage to get to the top, and I like driving with the big attack. We will see.”

Jari-Matti Latvala was a further three-tenths of a second adrift in a Ford Fiesta RS WRC, ahead of fellow Ford Abu Dhabi World Rally Team driver Mikko Hirvonen in fourth.

“I thought about making some set-up changes but there is not enough time."

“I’m not really worried about road position for tomorrow. Running third on the road is quite alright. Mikko will suffer more and have less time to catch up. For sure, with only two days it’s going to be flat out from the start.”