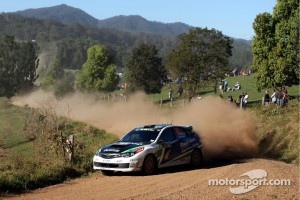 *Subject to the official publication of the results by the FIA

Young Kiwi Hayden Paddon (Subaru, Michelin) and his co-driver John Kennard (NZL), made history in their Michelin-shod Subaru Impreza on the fifth round of the 2011 FIA Production car World Rally Championship at Rally Australia this weekend when they took their fourth victory in-a-row – on only their fourth event this season – and secured the PWRC laurels with two rounds to go. Paddon became the first ever driver from the Southern Hemisphere to earn a world title in any WRC series and topped his weekend off by scooping eight WRC points for finishing sixth overall, a phenomenal feat in a Group N car. Meanwhile, Kennard became only the second man ever to win the FIA Production car World Rally Championship for Co-drivers.

With Paddon’s closest rivals Martin Semerád (CZE, Mitsubishi) and Patrik Flodin (SWE, Subaru) not having nominated Rally Australia, Paddon knew that he had to pull out all the stops and aim for victory this weekend, but he was well aware that his quest for the glory wasn’t going to be easy.

It was young Polish driver Michal Kościuszko (Mitsubishi) who took an early lead in the PWRC, after Thursday night’s pair of super special stages. However, when it came to the gravel roads Paddon stormed through the treacherous stages of Day One proper, sealing a clean sweep of stage wins in the morning loop to build a 55.6 second lead over second-placed Kościuszko. The unexpected rain made the afternoon stages pure endurance for the PWRC drivers. Paddon tackled the second loop with his usual consistency and, despite easing off due to the adverse road conditions, extended his lead and finished Day One 1 minute 20 seconds ahead of Kościuszko who was unable to match the 2010 Pirelli Star Driver’s relentless pace.

Disaster struck a few kilometres into SS11 – the opening stage of Day Two – when the turbo hose on Paddon’s Subaru broke and the Kiwi lost nearly a minute in the following stages. This promoted Kościuszko back into the lead as Paddon fell to second, but the Kiwi wasn’t about to let his dreams of sealing the Championship on his home continent fade just yet. He whipped through the afternoon stages clocking four stage wins and taking back pole position by one second on SS18, the last gravel stage of the day. Never a man to do things by halves, the Kiwi rebuilt a comfortable 51.3 second lead on Day Three’s opening loop of stages, winning SS22 and SS23 before cruising through the final three stages to bring home his fourth consecutive event win and the PWRC crown.* Paddon was also awarded the Abu Dhabi Spirit of the Rally for his record breaking achievements. Refusing to be drawn into a battle he knew he couldn’t win, Kościuszko was delighted to bring his Mitsubishi Lancer home safely in second place in the PWRC, his best result of the season so far. The Polish driver is now in the running for PWRC runner-up and will do his best to seal good results in the two remaining events in Spain and Great Britain.

WRC Academy frontrunner Brendan Reeves (AUS, Subaru, AUS) switched to the PWRC this weekend to compete in his home event, taking the place of another young driver, Norway’s Anders Grøndal’s. After pushed hard to secure both a car and sponsorship for the event, Reeves wanted a good result. Having pushing Saliuk hard on Day Two and claiming a stage win on SS13, his hopes of a podium finish faded when he had to retire from Day Two due to a failure in his Impreza’s fuel pump. After restarting on Day Three, he did however achieve a commendable seventh.

Having graduated to the PWRC at the start of this season, Last year’s Junior World Rally Championship Rookie Award Winner Harry Hunt (GBR, Citroën, Michelin) clinched his third victory in the two wheel drive category in his DS3-R3 and secured the 2011 FIA Production car Cup for Drivers of 2WD Cars.*

1st – HAYDEN PADDON (NZL): “I can't believe it, it's incredible! This wasn't an easy rally at all for us but we made it. Twelve months ago I was back home in New Zealand with no money, no sponsors and we didn't even think we would be able to do the PWRC. We found the sponsors, we found a car and a team and now we're here after a stunning year. And for sure there's still a lot to come. We'll try as hard as we can to come back next year in something bigger and better."

2nd – MICHAL KOŚCIUSZKO (POL): “Second place is really good for us. We knew from the beginning that it was going to be hard to fight with Hayden but we drove our own rally, stayed out of trouble as much as possible and achieved a very good result. We even got six WRC points, which is great! Now we are focusing on the next two rounds, we will make big changes to our Mitsubishi Lancer as we really want to win an event this year.”

3rd – OLEXSANDR SALIUK (UKR): “It was a really good weekend for us. After our big accident in Finland we were eager for a good result here in Australia so third place is really amazing. We didn’t have any problems during the weekend and our Mitsubishi worked very well all the way through.”