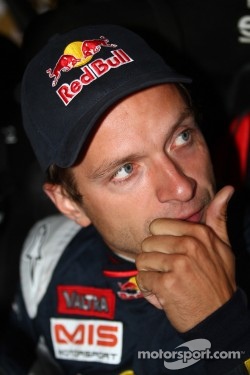 With back-to-back victories and an 18-point lead at the top of the drivers' standings, Juho Hanninen is in the ascendancy in the Super 2000 World Rally Championship, which resumes on ADAC Rallye Deutschland this week.

And that’s despite the Red Bull Skoda driver insisting asphalt is his least favoured surface. While some of his performances in the distant past would have added weight to that argument, the Finn has become a revelation on sealed-surface events in recent years, particularly in the Intercontinental Rally Challenge, where he has taken a brace of impressive Tarmac victories this season.

“I want to go rally-by-rally and not think to the points,” said the 30-year-old. “We have done quite a few rallies, but there are still two new Tarmac rallies coming for me, which can make it quite difficult. I would like to win one of those, but the competition will be tough.”

Hanninen’s co-driver, Mikko Markkula, is slightly more optimistic heading to Germany. Speaking following their SWRC victory on Neste Oil Rally Finland last month, Markkula said: “This year the Tarmac rallies have been strong for us and so why not in Germany and the rest of the rallies?”

Trailing Hanninen in the table is Martin Prokop, the leading Ford Fiesta S2000 runner. The Czech finished second in the SWRC category on Rallye Deutschland last season and has plenty of asphalt knowledge. He has stated a win in Germany is vital to his title hopes.

“Juho is starting to edge away from me in the championship standings so I need to win this rally to still be in with a chance of taking the title,” said Prokop, who prepared for the event with a test in his homeland last week.

Ott Tanak is third in the table but seemingly out of contention for the crown following his crash on Rally Italia Sardegna, where he inflicted substantial damage to his Fiesta when he rolled out of the lead battle on the second day of the gravel event.

“This will be my second time in Germany so, for sure, it will help that I know some of the stages from last year,” said the Estonian driver, who is planning to test in Germany today, Monday. “Last year’s event was the first asphalt rally that I had competed in. As always, I want to gain as much experience as I can but I will be looking to finish on the podium.”

Bernardo Sousa is fourth in the standings following a frustrating showing on the previous round in Finland where a series of mechanical issues held him back. The Portuguese is two points clear of local hero Hermann Gassner Jr, who has enjoyed a solid, if unspectacular, start to his SWRC career in the second Red Bull Skoda.

Estonian teenager Karl Kruuda, in a Skoda, is sixth in the table one point behind Gassner and 17 clear of Hungarian Fiesta driver Frigyes Turan.

Nasser Al-Attiyah is back on SWRC duty after not nominating Rally Finland as one of his scoring events. However, two non-scores on the first two rounds have prevented the Qatari from mounting a title bid in his Barwa World Rally Team Fiesta.

With Eyvind Brynildsen unable to compete in Germany due to the hefty damage he inflicted to his PS Engineering Skoda in a crash in Finland, Albert Llovera is the only other SWRC regular competing in Germany in his Abarth Grande Punto.

German Felix Herbold, driving a Fiesta S2000, has been nominated as a wildcard entrant by the event organisers and will be eligible for championship points.

It's all change in the FIA WRC Academy. Following three events on gravel, the 16 aspiring world rally champions will be putting their asphalt driving skills to the test when they tackle ADAC Rallye Deutschland this week.

And to ensure they are fully prepared for the challenge ahead, the young stars have been accumulating as much Tarmac knowledge as possible as they vie for the 500,000 Euros career-development scholarship, which will be handed to the inaugural champion.

While Egon Kaur, a relative asphalt novice, and Craig Breen - currently first and joint second in the WRC Academy Cup standings respectively - have both contested practice events, Alastair Fisher headed to a kart track in his native Northern Ireland, where he spent an afternoon at the wheel of his own Ford Fiesta R2, similar to the one he uses in the WRC Academy.

“The first three Academy rounds have been on gravel so it’s important to get back into Tarmac mode and get your brain thinking in the right way,” said the 23-year-old, who is currently 10th in the WRC Academy Cup table. “The stages in Germany have lots of junctions so one of the main things we did was to practice maintaining speed and momentum into and out of corners so you never lose time on the straights, which is very important in a lower-powered car like the Fiesta.”

The WRC Academy crews, who compete in identical Fiesta R2s prepared by the British M-Sport organisation from a base in Krakow, Poland, and use Pirelli control tyres, will tackle six stages on Friday and a further eight on Saturday when the results will be declared.

Australian Molly Taylor, one of six Pirelli Star Drivers competing in the WRC Academy, believes the change of surface could turn the formbook on its head.

“I think the dynamics of the championship will change for sure and it will be interesting to see what happens,” said Taylor. “For me, the aim is to focus on my job and drive my own rally. Coming from Australia, most of my rallying has been done on gravel, so I am still learning the Tarmac but we have done some really good testing and I feel a lot more confident on the surface.”

The mainly asphalt route could also play into the hands of Czech Jan Cerny and Italian Andrea Crugnola, whom Craig Breen regards as Tarmac specialists. “It’s a Tarmac event but very specialised,” said Irishman Breen. “The only option I have is to go for the win but drivers like Jan and Andrea are good on Tarmac and will be out to prove a point.”

As well as a change of surface from gravel to asphalt, the driver line-up has altered for ADAC Rallye Deutschland with local hero Sepp Wiegand set to make his WRC Academy debut in place of countryman Christian Riedemann. Riedemann has been invited to drive a Volkswagen Motorsport Skoda Fabia Super 2000 on the event and has received special permission to miss his home round of the Academy.

In other changes, Argentine Miguel Baldoni will now be co-driven by Gustavo Franchello, while Morten Erik Abrahamsen will navigate fellow Swede Fredrik Ahlin.