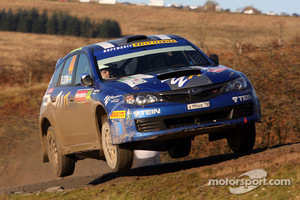 A thrilling three-way battle for the runner-up spot in the Production Car World Rally Championship will take centre stage when the series concludes on Wales Rally GB this week.

Swedish Subaru Impreza driver Patrik Flodin currently occupies the position but with Michal Kosciuszko, in a Mitsubishi Lancer, six points behind and Czech Martin Semerad two points adrift of the Pole, the fight for supremacy is wide open heading to the challenging gravel event.

Flodin, the winner last time out in Spain, has recruited a replacement co-driver after Goran Bergsten had to withdraw. While Timo Alanne is a highly capable stand-in, it will take time for the new partnership to gel, which could ultimately hold Flodin back. However, the Swede relishes competing on gravel and in the Welsh forests so will be more than capable of putting on a charge.

Kosciuszko has been improving his form throughout the season on his maiden campaign in the PWRC and is overdue a victory. Semerad, meanwhile, has endured a frustrating second half of the season following the high of his victory in Sweden and a podium in Portugal.

Mexican Benito Guerra and Ukrainian Valeriy Gorban also stand a mathematical chance of claiming the runner-up spot but would need Flodin, Kosciuszko and Semerad to hit trouble to make an impression higher up the leaderboard.

Other drivers capable of running at the front in Wales are Jarkko Nikara and Jason Pritchard. Nikara, from Finland, was a podium finisher in Finland and has taken over Anders Grondal’s registration after the Norwegian’s funding ran out earlier in the season. Nikara is highly-rated while Welshman Pritchard, a wildcard entrant, lives in Builth Wells where the event’s service park will be based and has good knowledge of the stages.

One driver who won’t be chasing PWRC points in Wales is Hayden Paddon, the 2011 champion. Paddon, from New Zealand, has obtained special permission to step up to an R4-specificaiton Impreza for the event. Because the car is not eligible for the PWRC, he won’t be a contender for class honours.

Harry Hunt will complete his PWRC campaign determined to score a finish on his home event. The 23-year-old from London clinched the PWRC Production Car Cup for Drivers of 2WD Cars earlier this season.

The inaugural FIA WRC Academy season reaches its climax in Wales with two drivers locked in combat for the 500,000 Euros scholarship handed out to the winner of the young driver-training category.

Created to provide a level playing field for rising talents to compete at the sport’s highest level in identical Ford Fiesta R2s using the same Pirelli tyres, the series has proved a big hit. And it all comes down to the season-closer in Great Britain when Egon Kaur, from Estonia, and Irishman Craig Breen will scrap for title glory.

Kaur, the winner of the first three events, is in the ascendency with an advantage of 20 points over Breen, who claimed his maiden victory in Germany back in August. With 25 points available to the winner, Breen’s chances, on paper at least, look pretty slim. But with one point up for grabs for every stage won, the destination of the WRC Academy Cup - and the huge career-advancement prize - is wide open.

In addition to the battle for first place, Alastair Fisher is only 10 points adrift of Yeray Lemes in third and on a high following his triumph in France last time out. Fisher actually inherited the spoils from Lemes on that event when the Spaniard was penalised for twice transgressing speeding rules. However, having led in Portugal and Finland the Northern Irishman’s success was richly deserved.

Australian Brendan Reeves is fifth in the table and relieved to be back competing on gravel after frustrating runs on the two asphalt events. Czech Jan Cerny, sixth in the standings, admits to lacking experience in gravel. Jose Suarez, Andrea Crugnola, Fredrik Ahlin and Timo van der Marel complete the top 10 heading to Wales.

Like Germany’s Christian Riedemann, who is 11th in the classification, the quartet has all claimed a podium finish this season. Riedemann also led the second round in Italy before a broken driveshaft stopped him at the start of day two. Although his Academy performances thereafter are by no means the stuff of legend, he’s already on Volkswagen Motorsport’s radar having been allowed to opt out of the WRC Academy on his home event to drive its Skoda Fabia Super 2000 as part of the German make’s ongoing driver assessment programme.

Other drivers keen to impress in Wales are Molly Taylor, the UK-based Australian, and Miko-Ove Niinemae from Estonia, the youngest of the 17 WRC Academy pilots competing this week.

The WRC Academy welcomes two new recruits for its season finale: Christopher Duplessis from the United States and Germany’s Valentin Hummel will be in action on the gravel event although neither will be eligible for points because they registered after the entry deadline.

Meanwhile, South African Ashley Haigh-Smith returns after he was injured in a crash on his category debut in France.