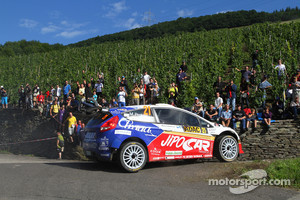 The chase for the 2011 Super 2000 World Rally Championship crown takes on added significance when crews descend on the Alsace region of France this week for the penultimate round of the series.

Juho Hanninen tops the standings in his Red Bull Skoda following victories in Greece and Finland. However, an error on the previous round in Germany has allowed his main rival Ott Tanak to trim his advantage to 18 points after he triumphed on the asphalt event last month.

With only two opportunities left to score points, it’s vital that Tanak outscores Hanninen in order to keep his hopes of the SWRC title alive. But Czech Martin Prokop can also sneak in to claim the championship laurels in his Fiesta - providing he hits top form in France and on the season finale in Spain - so a tight battle is expected this week.

Finn Hanninen prepared for the event with a test in Czech Republic last week. He said: “We approach the rally with maximum focus and we certainly want to win as many points as possible, because every point counts at this stage of the season.”

Despite the fact he remains in contention for the title, Tanak says his main priority is to build his knowledge at the wheel of his Ford Fiesta S2000, run by Markko Martin’s MM Motorsport operation.

“As always I want to gain as much experience as I can this year but I will be looking to finish on the podium in France,” said the young Estonian. “It would be a dream to take a win in France and of course I hope that this can happen but at first I need to start the rally, find a good pace and take things from there.”

Czech Martin Prokop is third in the drivers’ table in his Fiesta and has the pace to run at the front. “It’s still possible to take the championship so I am trying to keep focused. We need to try to push in France in order to win, but it’s probably going to be similar to last year and will go down to the final event for the title to be decided.”

Other drives in action in France include Hungarian Frigyes Turan, a regular on the podium this season in his Fiesta and Portugal’s Bernardo Sousa, who has the ability to challenge for a top three finish in his Fiesta.

Norway’s Eyvind Brynildsen is back on SWRC duty after failing to start in Germany due to the severity of the damage inflicted to his PS Engineering Skoda Fabia when he crashed at high speed in Finland.

Albert Llovera, from Andorra, is the lone Abarth Grande Punto driver in the field, while local hero Julien Maurin, in a Ford France-backed Fiesta, is eligible for SWRC points as a wildcard entrant.

Hermann Gassner Jr partners Hanninen in the Austrian Red Bull Skoda team and will be looking to impress, as will Nasser Al-Attiyah, who starts the event on a high following his run to second place on the Rally of Lebanon, a round of the Middle East championship recently.

While Egon Kaur's healthy advantage at the top of the WRC Academy Cup standings makes him the favourite to win the inaugural young driver-training series title, the challenging nature of the French stages means the Estonian is far from home and dry.

To make matters even more interesting, Kaur - the winner of the opening three gravel events - has limited knowledge on asphalt, which was highlighted on the previous round in Germany when his challenge failed to pack its usual punch.

Although he’d been a contender for victory all season, Craig Breen was able to capitalise on Kaur’s lack of Tarmac pace to claim his maiden WRC Academy win. The Irishman is one of six Pirelli Star Drivers competing in the WRC Academy this season with support from the Italian tyre firm and the FIA, the governing body of world motorsport, and will be a contender for first place in France.

Like Kaur, Australian Brendan Reeves considers asphalt to be his least favourite surface and could struggle to hold on to his third place in the drivers’ standings, particularly with Spanish ace Yeray Lemes close behind.

Lemes, who placed second on ADAC Rallye Deutschland, is competing in France in the knowledge that he will drive a Super 2000 Skoda Fabia on his home round of the world championship next month after being selected for the step up in performance by Volkswagen Motorsport, which is assessing potential candidates for its entry into the WRC from 2013.

Christian Riedemann returns to the WRC Academy after competing in a Volkswagen-run Fabia in Germany. Like Lemes, he will also compete in Spain with the German make after impressing VW bosses with his performance on the Trier-based rally.

Miguel Baldoni will be on a high in France following his success on Rally de San Luis, a round of the Argentine championship, last weekend.

Alastair Fisher has been fast but frequently out of luck this season. Despite leading on several occasions and recording a number of fastest stage times, the Northern Irish driver has yet to secure the podium finish. He will be desperate for a change of fortune in France.

Several asphalt experts will be in action in France, including Spaniard Jose Suarez, Czech Jan Cerny, Dutchman Timo van der Marel and Italian Andrea Crugnola, who was third on round four. Conversely, Fredrik Ahlin, from Sweden, has limited asphalt knowledge but showed well in Germany by finishing sixth, while Molly Taylor attended an asphalt driving school in Italy to get ready for Rallye de France.

Ashley Haigh-Smith will make his WRC Academy debut in France although the South African’s late addition to the category means he is not eligible for points. Sepp Weigand, who took part in the series for the first time in Germany, in place of Riedemann, continues his campaign in Alsace. Like Haigh-Smith, the Weigand won’t be allowed to score championship points.