Peter van Merksteijn jr. will be fighting for points in Rally Catalunya 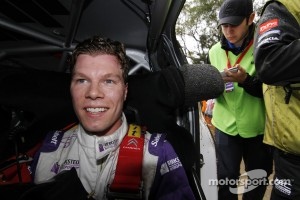 Peter van Merksteijn jr. will fight during the coming weekend with his Citroën DS3 WRC for a place in the top ten in the RACC Rally Catalunya. Together with co-driver Erwin Mombaerts, the Van Merksteijn Motorsport driver will set off from the holiday resort of Salou to take on the full entry list with 21 World Rally Cars which will battle for the championship points.

Peter van Merksteijn jr. last participation in the WRC Rally Catalunya dates back from 2008 and since that year the beautiful rally has gone through many changes. The tarmac event that is known for the wide and winding roads will have for the second year a mixed surface, on the opening day the entrants will have to cope with special stages which will consist of both tarmac and gravel. The special stages on Saturday and Sunday are all fully run on tarmac but some of these stages will be new to Peter jr.

Contrary to the previous event in the World Rally Championship, the Rallye de France, Peter jr. had this time an opportunity to test with the DS3 WRC on comparable roads as will be used in the Rally Catalunya. In the south of France, Peter jr. and Erwin were able to complete a comprehensive test with the DS3 WRC and have been working on finding a good setup for the car to tackle the stages of next weekend. “Testing prior to the start of an event on comparable roads is essential. To find a good setup for the car a shakedown stage is just not sufficient” according to Peter van Merksteijn jr.

After having driven in this rally for the WRC for the last time 3 years ago it will be a matter of getting a feeling for the new special stages and gaining the experience. The fact that the Friday will consist of mixed surface special stages will be a new experience for him. Despite these changes Peter van Merksteijn jr. is hoping for a good result in Spain with the Citroën.

The RACC Rally Catalunya will start Thursday evening with a podium ceremony on the boulevard of Salou, after which on Friday morning the true action will begin out off the service park at PortAventura. A total of 62 entries among which 21 World Rally Car’s will have to complete during the three day event 18 special stages with a total length of over 400 kilometer.