After a highly successful season in their DS3 RRC, Robert Kubica and his co-driver Maciek Baran will compete in the top-flight category at the final round of the world championship. Thanks to the support of Citroën Racing and Sheikh Khalid Al Qassimi, they will line up at the start of Wales Rally GB in the DS3 WRC of the Abu Dhabi Citroën Total World Rally Team.

With four category wins from the six rallies in which he has competed, Robert Kubica can rightfully feel pleased with his debut season in the World Rally Championship. The Polish track racer has overcome a genuine challenge in winning at extreme and varied international events in the DS3 RRC. Currently leading the WRC2 championship standings, he will be trying to seal overall victory later this month at Rally RACC Catalunya, where second place would be enough for him to win his first world title. Wales Rally GB, which until now wasn’t part of his programme for this year, will provide him with the perfect opportunity to put his skills to the test in rally’s top-flight category. 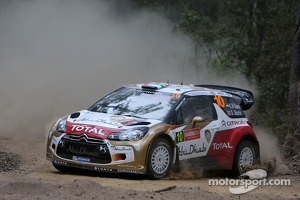 “Such a fantastic performance is worthy of our trust,” commented Sheikh Khalid Al Qassimi, who welcomed the opportunity to offer his seat to a famous and worthy driver. “Robert’s fine result this year are down to his hard work and determination. We know he will do a great job in representing the Abu Dhabi Citroën Total World Rally Team,” he added.

Convinced by the qualities of the Pole, Yves Matton (Citroën Racing Team Principal) detailed the reasons behind this choice, entirely in keeping with the team’s policy for showcasing promising drivers: “In my discussions with Robert, we agreed that he would move up to the next category if he won the WRC2 title. It’s true that as things stand, he hasn’t won the title. But even if he doesn’t win it in Spain, he has still had a very successful season. He is therefore perfectly entitled to have a go at Wales Rally GB. There is no doubt that his motivation and professional attitude mean he can set his sights on securing a good result.”

“This one-off outing for the works team is a great opportunity for me, but it’s also a huge challenge,” revealed Robert. “Wales Rally GB wasn’t part of my original programme, so I’m very happy to be able to have this precious experience. I would like to take this opportunity to thank my partners for this season, who have made this possible.”

Kubica still has regrets over missed title bid in 2008