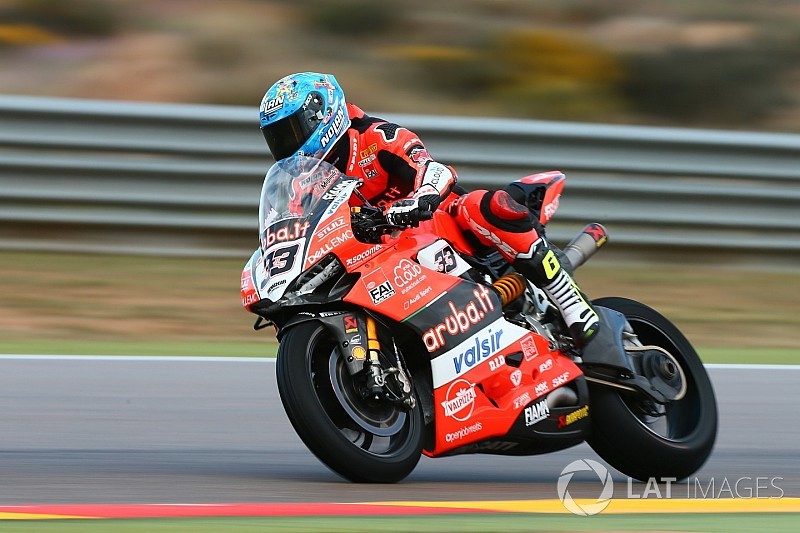 Marco Melandri edged Jonathan Rea by just 0.039 seconds to top a weather-affected day of practice for the Aragon World Superbike round.

The second 40-minute session was completely dry, with top spot changing hands constantly as the field made up for the lack of dry running from the morning.

Melandri fired in a 1m50.652s at the death to depose Davies, with the Kawasaki duo of Rea and Tom Sykes pushing the Welshman back to fourth with final efforts of 1m50.691s and 1m50.849s respectively.

Rain in the final session of the day meant improvements on the combined times were few and far between.

Yamaha's Alex Lowes was the early pacesetter in FP3 with a 1m51.347s, which put him fifth overall, before MV Agusta's Jordi Torres shuffled him back with a 1m51.212s just moments later.

Honda's Leon Camier – who, along with teammate Jake Gagne [14th], is using the Magneti Marelli electronics package having completed the first two rounds with the Cosworth ECU – was outside of the Superpole 2 places at the end of FP2, but jumped up to 10th just as the rain began to intensify.

Ducati junior team rider Michael Ruben Rinaldi, making his WSBK debut this weekend, put Camier under threat, but lost out in the final sector and will face SP1 on Saturday.

With the intervention of the weather, Melandri ended Friday as the man to beat with his FP2 time ahead of the KRT pairing, while Davies – who did not venture out in FP3 due to a technical issue – headed Torres to complete the combined top five.

Lorenzo Savadori was the only other improver inside the top 10 in FP3, the Milwaukee Aprilia rider cementing ninth with an early gambit of 1:51.811s ahead of Camier.

Savadori’s temporary Aprilia stablemate and WSBK returnee Davide Giugliano – who is replacing the injured Eugene Laverty for at least the next two rounds – was 12th fastest.