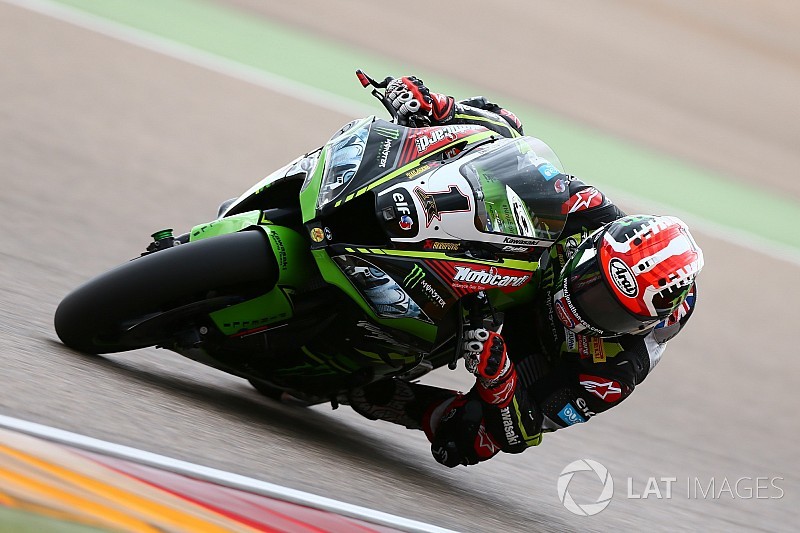 Jonathan Rea cruised to his 56th World Superbike win in the latter stages of a tense first race at Aragon, while Chaz Davies pipped Ducati stablemate Xavi Fores to second.

The race was halted at the start of lap four after an incident involving Leon Camier, Lorenzo Savadori and Jordi Torres at Turn 11 the tour before.

Torres was unable to make the restart, while a conscious Camier was taken to hospital for checks. Savadori just made it back to pitlane in time to get his bike fixed and take up 10th on the grid – the Italian going on to finish 15th.

Rea took the lead at the restart, while Yamaha's Alex Lowes cut his way through from fifth to second ahead of poleman Marco Melandri.

A wobble under braking at Turn 1 at the start of lap three forced Rea to run wide, and allowed Lowes to come through.

The Yamaha man's time at the front was brief, as a determined Rea scythed past into Turn 4 next time around, while Lowes steadily slipped down the order.

By lap five, the top three of Rea, Melandri and Fores had broken away from the rest of the pack, with the latter taking the lead on lap nine.

Davies began to close up on the leaders, while Rea retook the lead with six laps to go. The Kawasaki man put his head down and immediately built up a comfortable advantage of over a second to claim his second win of the year.

Fores came under pressure from the factory Ducati duo in the closing stages, though Melandri's challenge faded when he ran off at the first corner on the penultimate lap.

Fores held second at the start of the last lap, but was passed by Davies into Turn 15. Fores launched a daring raid in a bid to retake the place at the last turn, but Davies held on by just 0.023 seconds.

Melandri took the chequered flag in fourth, dropping 14 points down on race winner Rea in the championship. He will start from pole on Sunday ahead of Michael van der Mark and Tom Sykes, who finished fifth and sixth ahead of Lowes.