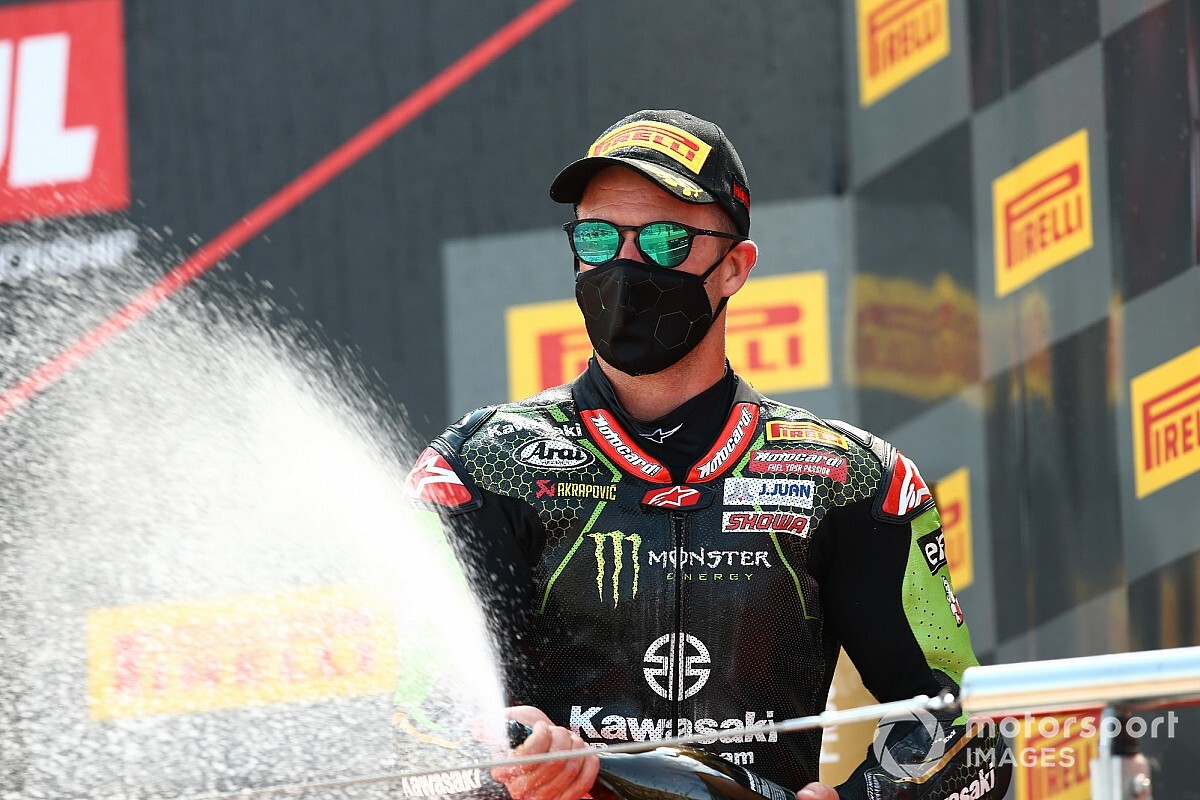 Jonathan Rea stretched his World Superbike championship lead with victory in the final race of this weekend's second Aragon round after a late pass on Michael Ruben Rinaldi.

Kawasaki rider Rea started second on the grid after his first Superpole race defeat of the year he quickly assumed the lead from main title rival Scott Redding at the start.

Redding struck back later on the first lap at Turn 13 in a similar move to the one that set up his victory earlier in the day, but couldn't pull away as he, Rea and Rinaldi formed a breakaway group at the head of the field.

That was how the order remained until lap 6 of 18, when Rinaldi found a way past both Rea and the factory Ducati of Redding in successive corners to grab the lead.

Redding then ran wide in the last corner, opening the door for Rea to pass for second, and from that point onwards the race became a straight duel between Rinaldi and Rea.

Rinaldi, who took his first WSBK win in Saturday's first race on the Go Eleven Ducati having never finished higher than fourth previously, soaked up the pressure from five-time champion Rea for several laps but could never shake off the Kawasaki man.

On lap 15, Rea attempted to pass at Turn 7 but ran wide in doing so and suffered a major moment, giving Rinaldi some breathing space, but the following lap the Ulsterman was back on Rinaldi's tail and launched a surprise move at Turn 6 to snatch the lead away.

After that, Rinaldi had no answer to Rea, who reeled off the final laps to secure his fourth full-length race win of the year by 1.244s.

With Redding trailing home a distant third, five seconds down, it means Rea's championship lead is out to 37 points with three rounds remaining.

Behind the leading trio, Honda rider Alvaro Bautista held fourth in the early stages only to crash out at Turn 9 on lap five, and on lap 13 Redding's teammate Chaz Davies threw away the place with a fall of his own at Turn 14.

That allowed Leon Haslam to secure his best finish of the year so far in fourth on the best of the Hondas, followed by Rea's Kawasaki teammate Alex Lowes.

Michael van der Mark and Toprak Razgatlioglu topped off a weekend to forget for Yamaha with sixth and seventh places, although Razgatlioglu regained third in the riders' standings as a result of Davies crashing out ahead of him.

Eugene Laverty was BMW's only finisher in 11th as Tom Sykes was forced out of the race on the opening lap with a technical issue.

Matteo Ferrari, standing in for the injured Leandro Mercado at Motocorsa Ducati, scored his first WSBK points in 14th place.