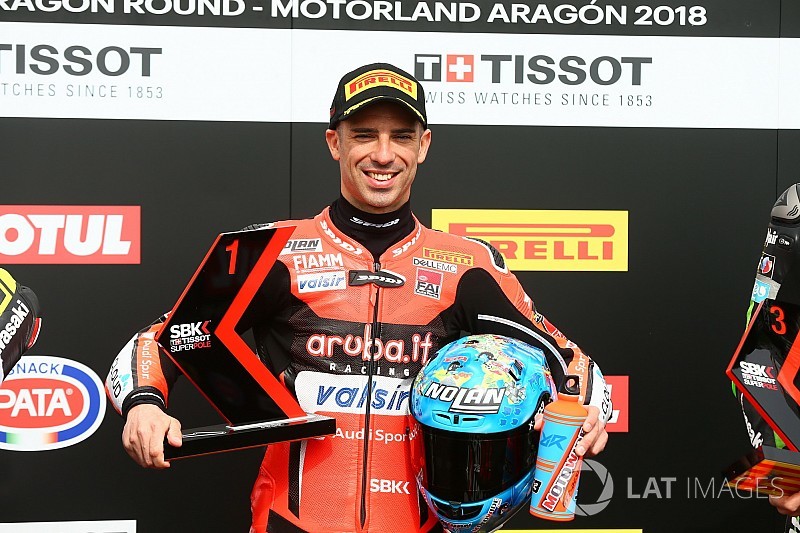 Rea set the benchmark on his Kawasaki on his first race tyre lap, a 1m50.075s, while KRT teammate Tom Sykes was only eighth after his opening efforts.

Davies also suffered a low-key start to qualifying, and was 11th as he started his qualifying tyre run. However, he was unable to lift himself up any further after crashing at Turn 2 with three minutes on the clock.

Just moments later, MV Agusta's Jordi Torres edged ahead of Rea's initial laptime with a 1m50.055s, though the Spaniard's time at the top of the timesheets did not last as Melandri streaked clear with a 1m49.543s.

Rea put the Italian under threat, but just missed out on a 1m49.574s, while Sykes – who crashed in FP4 this morning – completed the top three.

Xavi Fores guided his Barni Ducati to fourth, heading the Yamaha duo of Alex Lowes and Michael van der Mark, who were split by just 0.010s.

Torres slipped to the head of row three in seventh at the chequered flag, with SP1 graduate Michael Ruben Rinaldi eighth for his WSBK debut.

Jake Gagne came close to making it two Ten Kate Hondas in SP2 after going second quickest in the closing stages of SP1, but the American was shuffled out of the progression places by Rinaldi's final effort of 1m50.568s, and will start 13th ahead of Milwaukee Aprilia stand-in Davide Giugliano and Leandro Mercado.

Puccetti Kawasaki's Toprak Razgatlioglu was almost a second off of the pace of former European Superstock 1000 sparring partner Rinaldi in SP1, and will launch from 16th, with PJ Jacobsen and Roman Ramos joining him on row six.

Althea BMW's Loris Baz led the SP1 time when the field began their second runs, but the Frenchman was left stranded in 19th after a crash at Turn 2.