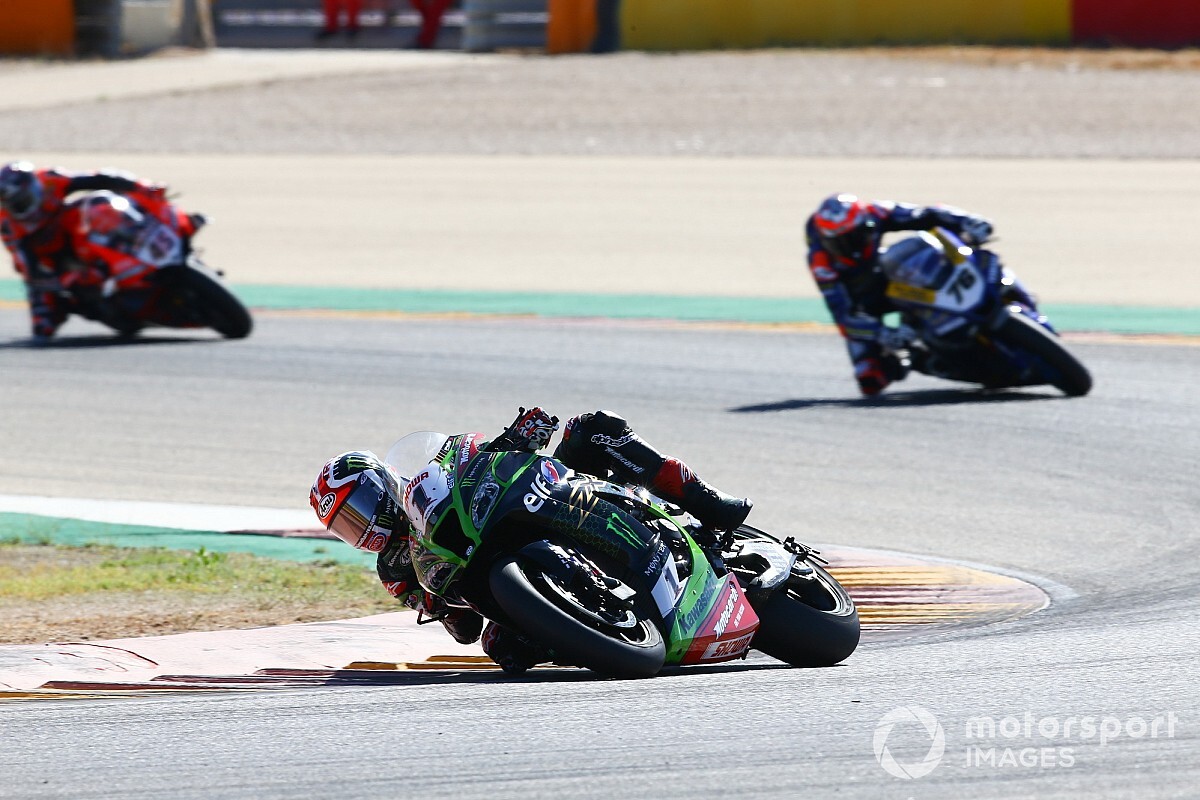 Kawasaki’s Jonathan Rea closed in on Scott Redding’s championship lead with an easy win over the Ducati rider in the Aragon World Superbike Superpole race.

Rea was jumped off the line by Ten Kate Yamaha man Loris Baz, though a mistake for the Frenchman at the first corner allowed the reigning world champion to come through.

Immediately, Rea began to build up an advantage over Baz, whose pace quickly started to fade, with the Kawasaki close to a second clear by lap four.

Rea’s lead continued to climb over the next few laps, with it standing at over two seconds at half distance.

Baz came under attack from Redding on the Ducati on the fifth tour, with the reigning British Superbike champion using the power of the V4 R Panigale to blast past the Yamaha rider into Turn 1 at the start of lap six.

But it was too late to do anything about Rea, who cruised to an unbeaten streak of Superpole race wins in 2020 by 2.6s.

After Redding’s victory in Race 1 on Saturday put him back into the championship lead, Rea has cut the gap down to just one point ahead of this afternoon’s second feature contest.

Michael van der Mark scythed up the inside of Yamaha stablemate Baz into Turn 7 on lap seven, and though he was snapping at Redding’s heels in the early stages, the Dutchman was unable to close the gap.

Securing third, van der Mark completes the front row for Race 2, with Rea and Redding set to launch alongside him.

Alvaro Bautista carved through from seventh on the grid on the Honda to take his best result of the season in fourth, putting him a good position for a podium challenge this afternoon.

Bautista came through on Kawasaki’s Alex Lowes at the start of lap nine, with Race 1 podium finisher Chaz Davies getting by late on to complete the top five.

Lowes ended up sixth ahead of an under-the-weather Toprak Razgatlioglu on the works Yamaha, with Michael Ruben Rinaldi on the Go Eleven Ducati and Baz rounding out the top nine spots on the grid for Race 2.

Tom Sykes recovered to 15th on the BMW after running off at Turn 8 on the opening lap.

The Briton bounced over the gravel trap and re-joined in the middle of Turn 9, with Leandro Mercado powerless to avoid him on the Motocorsa Ducati.

Mercado had to be taken to the medical centre for checks having been stretchered off track, while the incident has been placed under investigation.