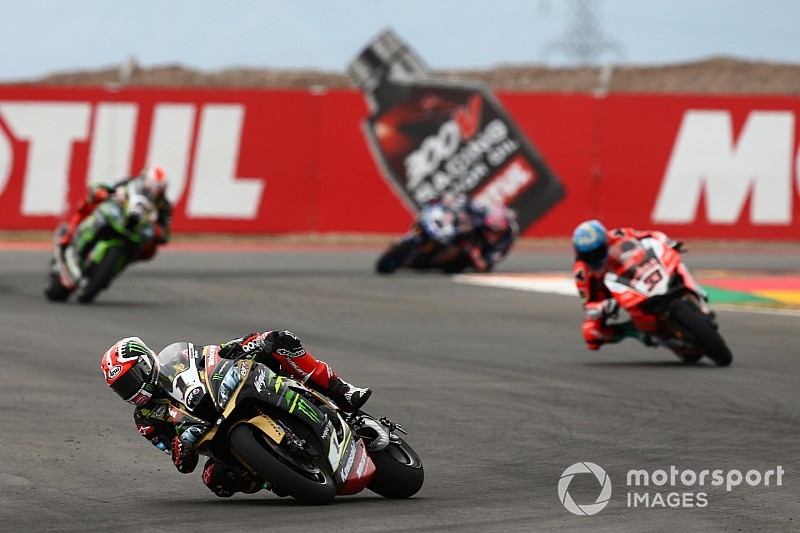 Rea gritted his teeth through illness to battle his way into the lead by lap eight, and resisted a brief retaliation from Barni Racing's Xavi Fores to ease into the distance for his fifth double victory in a row.

Poleman Fores grabbed the holeshot at the start from Eugene Laverty and Race 1 podium finisher Toprak Razgatlioglu, while Rea muscled his way through to fifth from eighth on the grid.

Rea threw his Kawasaki up the inside of Yamaha's Michael van der Mark at Turn 12, but ran in too hot and opened the door for the Dutchman's teammate Alex Lowes to move into fourth.

Another moment, as he applied the throttle while battling Ducati's Chaz Davies for fifth at Turn 7 on lap two, dropped Rea behind Marc Melandri as well, though he deposed of the Italian a few corners later.

Fores continued to lead, with his 1.7s lead opening up to three when the chasing Laverty crashed going through Turn 6 on the third tour.

At the same time, Rea finally cleared Davies when the Ducati man ran wide at Turn 2, and then also took third from Lowes at Turn 8.

Razgatlioglu fell victim to Rea on the following lap, with the world champion demolishing Fores' lead in a handful of tours to shadow the Barni rider at the start of lap eight.

Rea tried a move around the outside of Turn 7, but Fores countered this into the next corner. However, the Spaniard was powerless to stop a daring raid by Rea at the first turn from succeeding on lap nine.

Once clear, Rea eased to a lead of over five seconds to secure his 16th win of the season, while Fores registered his fifth rostrum appearance of the year in second to claim the independent riders' title for 2018.

Davies and Melandri put on a late charge to steal the final podium spot from Razgatlioglu, with Melandri taking third from his teammate.

Tom Sykes faded to ninth in the opening stages on his ZX-10RR, but recovered in the closing stages to finish fifth ahead of Lowes, while Razgatlioglu plummeted to seventh in the latter laps.

Lorenzo Savadori was the sole Aprilia at the finish in eighth, with van der Mark and Honda's Jake Gagne completing the top 10 from Althea BMW's Loris Baz, who was forced to start from ninth after a three-place grid penalty.

Leon Camier pulled out of the race with a mechanical issue on lap eight, with Jakub Smrz, Maximilian Scheib and Florian Marino also failing to finish – the latter taken to the medical centre after an early tumble.