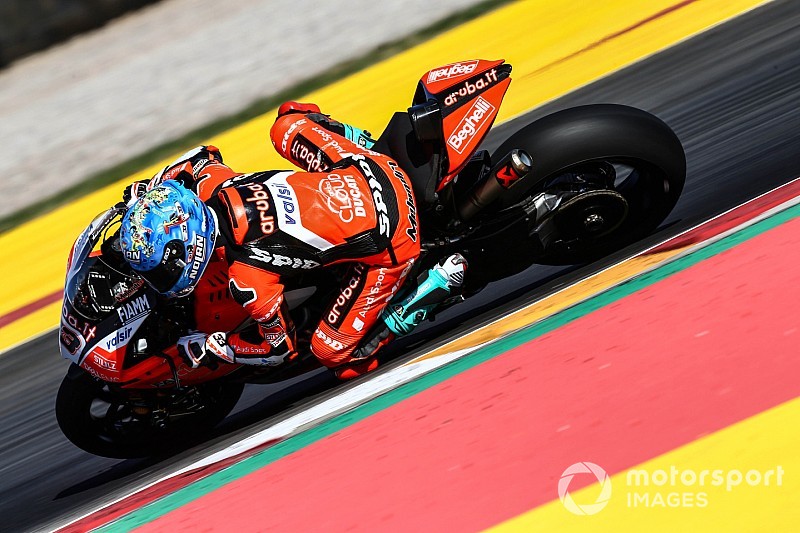 Melandri seized control of the timesheets in the closing stages of SP2 on his Ducati, before blitzing the field with his final attempt to cement his first pole since Aragon with a 1m39.012s.

Practice pacesetter Rea set the early pace in SP2 with a 1m40.023s, but the Kawasaki man was soon deposed by Melandri, who fired in a succession of fastest tours which culminated in a 1m39.729s.

Rea's Kawasaki stablemate Tom Sykes had to come through SP1 for the first time this season, and used his extra 15 minutes of track knowledge to set the timing screens ablaze on his first qualifying tyre lap.

Sykes fired in a 1m39.558s to lay the gauntlet, though this was beaten by Rea by a tenth despite the Ulsterman suffering a moment on the front end of his ZX-10RR at Turn 8.

Rea ran wide at the first turn at the beginning of his final lap, forcing him to abort and leaving him powerless to halt the late surge from Melandri.

Melandri usurped Rea with a 1m39.376s on his first Q tyre lap, and the Italian dug deep on his final effort to go four tenths clear with a 1m39.012s to secure pole.

Rea held onto second despite only having one lap on the Q tyre, while a late lap of 1m39.530s from Milwaukee Aprilia's Eugene Laverty put him onto the back of the front row in third.

Toprak Razgatlioglu put his customer Puccetti Kawasaki into seventh ahead of the second Aprilia of Lorenzo Savadori, while Chaz Davies was left in ninth after encountering a late technical issue with his Ducati.

Althea BMW's Loris Baz was just under a tenth outside of the SP2 progression places with a 1m40.352s, and will start from 13th ahead of Honda's Jake Gagne and rookie Florian Marino, who is replacing the ousted PJ Jacobsen at Triple M Honda.