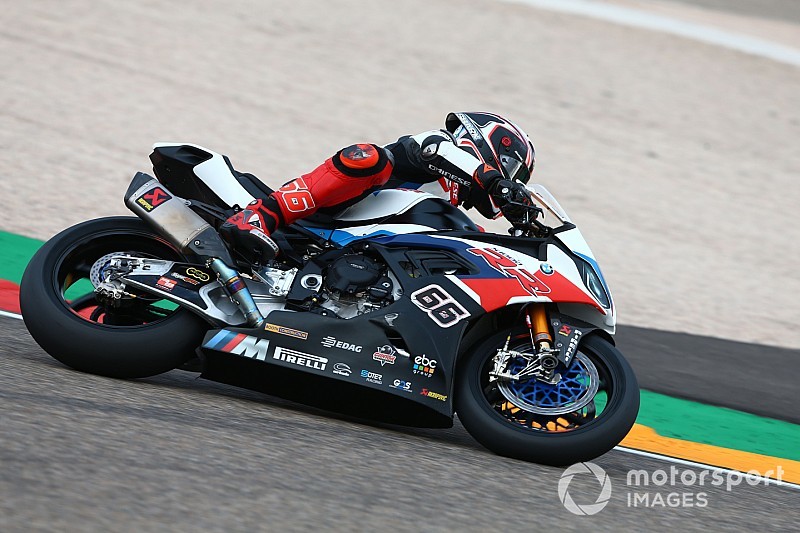 BMW rider Tom Sykes set the pace on Friday practice for this weekend's Assen World Superbike round, heading up a top five split by only 0.031 seconds.

Sykes beat former Kawasaki teammate Jonathan Rea by three thousandths of a second with a time of 1m35.414s, which he set after the chequered flag fell in the afternoon session.

Rea was the pace-setter for most of Friday as he led from his first representative lap until the finish in FP1, and was trading the lead with teammate Leon Haslam in FP2.

Haslam ended up just 0.01s slower than Rea in third as the second BMW of Markus Reiterberger and local hero Michael Van der Mark (Yamaha) ended up a close fourth and fifth respectively.

Points leader Alvaro Bautista, whose Ducati has had its rev limit cut by 250rpm for this weekend following the Spaniard's dominant start to the year, was sixth-fastest, but was only 0.133s off the pace.

The top 10 was completed by Chaz Davies (Ducati) and Alex Lowes (Yamaha), the latter having a crash at Turn 9 in FP1.

Honda, which has only had one top 10 finish in the first three rounds of the season, had its rev limit increased by 500rpm, but that didn't yield any significant improvement as Leon Camier was a lowly 13th.

Hector Barbera, standing in for the injured Leandro Mercado at Orelac Kawasaki after his Supersport bike was stolen last week, kicked off his WSBK career in 16th place.