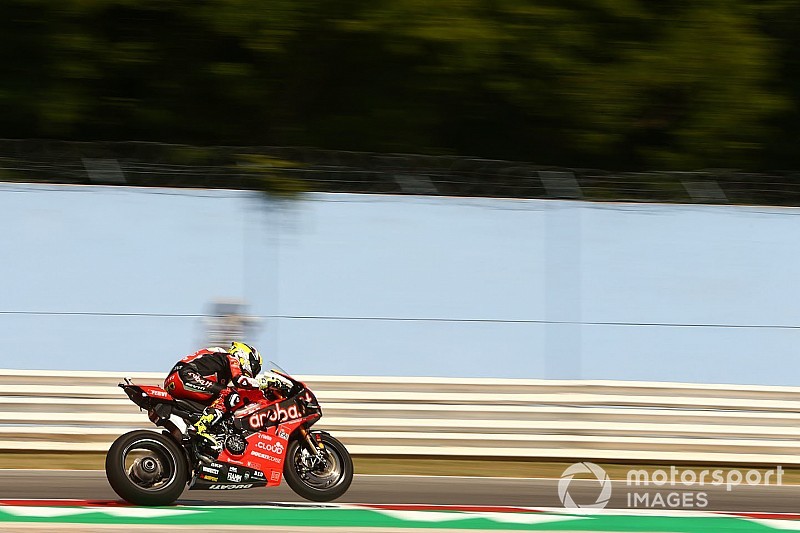 Bautista took over the lead from poleman Rea at the start of lap three, and quickly built up a healthy advantage, with Rea finishing fifth after rejoining from a late fall at Turn 10.

Saturday race winner Rea grabbed the holeshot off the line, with GRT Yamaha's Sandro Cortese slotting into second ahead of Bautista.

The Ducati rider quickly usurped Cortese, and took the lead from Rea before they reached the first turn at the start of the third tour.

Once in the lead, Bautista immediately put eight tenths between himself and Rea, opening that gap to nearly one second on lap five.

Bautista continued to extend his lead over Rea, before the Kawasaki rider crashed at Turn 10. He rejoined in sixth having clung onto his ZX-100RR as it rolled on the tarmac.

Remaining unchallenged to the chequered flag, Bautista cruised to his 14th win of the season by 7.2 seconds to open his championship lead back up to 39 points and secure pole for this afternoon's second feature race.

Alex Lowes made up for the disappointment of crashing from the lead in race one on Saturday to finish second on the Yamaha, with KRT's Leon Haslam beating Kawasaki stablemate Toprak Razgatlioglu (Puccetti) to claim the marque's 400th podium in third.

Rea managed to overhaul the sister GRT Yamaha of Marco Melandri – who started from 19th due to a six-place penalty for his collision with Chaz Davies at Jerez – on the final tour to recover to fifth after his earlier tumble.

Cortese fell from a maiden WSBK podium in third at the final corner on lap seven, while Ducati's Davies crashed early in the race but rejoined to finish a lowly 17th.

BMW's Tom Sykes was involved in the battle for the final podium place in the closing stages, but was forced to park up when his S1000RR developed a mechanical issue on the last tour.