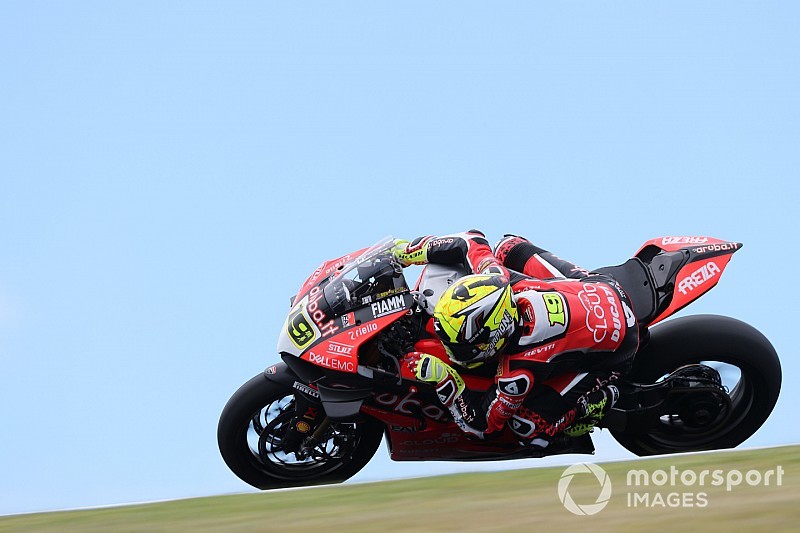 Alvaro Bautista made it two wins in a row at the start of his World Superbike career at Phillip Island, but had to work hard to get the upper hand over Jonathan Rea in the series’ first Superpole race.

The 10-lap sprint followed the same grid as Race 1, putting Kawasaki pair Rea and Leon Haslam ahead of Ducati’s Bautista on the front row.

Rea got away cleanly from pole position but Haslam got bogged down and was overtaken by both Bautista and Yamaha’s Alex Lowes, dropping down to fourth.

Lowes subsequently managed to pick off Bautista later in the lap, but the Spaniard used the straightline advantage of the new Panigale V4 R to shoot back into second.

Bautista again used the grunt of his Ducati to pass Rea into Turn 1 and take the lead, although unlike Lowes the Kawasaki rider was able to fight back and retake position into Turn 4.

On the following two laps, Bautista yet again tried to exploit Ducati’s speed at the start/finish straight in his battle with Rea, but the latter was able to brake later on each occasion and maintain the status quo.

Bautista instead dived down the inside of Rea at Turn 2 on the sixth lap and that move would eventually decide the race in his favour.

From there on, Bautista maintained an edge over Rea and slowly started chipping away on the penultimate lap before going on to win the race by over a second.

Haslam finished five seconds down the road in third, while Lowes dropped away after his early heroics and barely held off Yamaha teammate Michael van der Mark for fourth.

GRT Yamaha pair Marco Melandri and Sandro Cortese were also involved in a late race fight, with the Italian making a move on the last lap to steal sixth from the reigning World Supersport champion.

Michael Ruben Rinaldi finished eighth on the Barni Ducati, ahead of Eugene Laverty (GoEleven Ducati), while factory Ducati rider Chaz Davies finished 10th for the second race in a row, having started from 16th on the grid.

Leon Camier and Ryuichi Kiyonari were classified 13th and 14th for the revived works Honda outfit.

Leandro Mercado, Toprak Razgatlioglu and Jordi Torres were involved in a three-bike accident on the final lap.

As per the new WSBK format, the results of the Superpole race will partially decide the grid for the final race of the weekend.

The top nine finishers from this race will form the first three rows, with the rest of the grid, from 10th onwards, determined by Saturday's regular qualifying session.