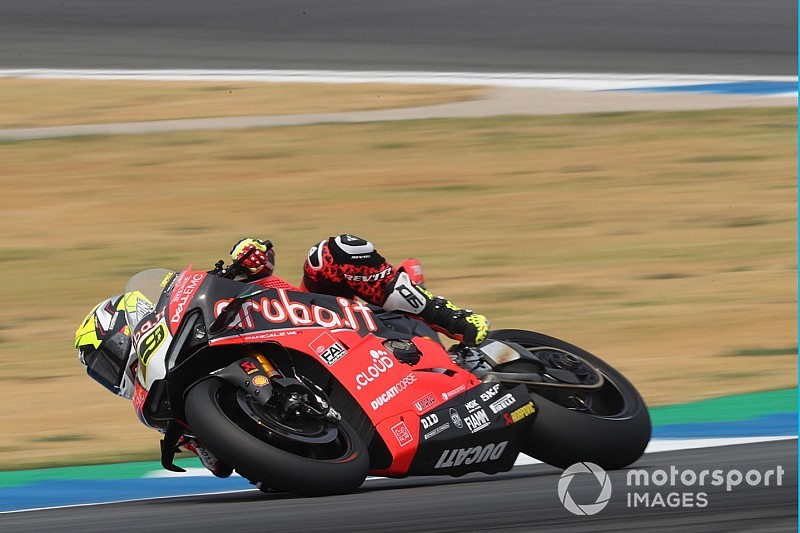 Alvaro Bautista continued his winning streak in World Superbike by beating Jonathan Rea in Race 1 at Buriram, after surviving early-race contact with the Kawasaki rider.

Rea passed pole-sitter Bautista at the first corner of the race but he couldn't shake off the Spaniard, whose Ducati has enjoyed superior top speed throughout the weekend.

After spending two laps shadowing Rea, Bautista made a move at Turn 3, only for the Northern Irishman to cut back aggressively.

The duo made contact and Bautista came close to crashing, but they carried on, with Rea retaking the lead and Bautista falling behind Alex Lowes.

Bautista quickly passed Lowes and Rea could enjoy a lead of around one second for a handful of laps before Bautista closed the gap, and made a move into Turn 3.

Rea was largely able to keep up with Bautista afterwards before his pace dropped in the final stages, as he started to lose a second per lap to Bautista.

The Ducati rider eventually won by a dominant 8.2s to take his fourth consecutive victory with Rea also continuing his streak of second-place finishes.

Rea himself enjoyed a comfortable gap to third, which was occupied by Alex Lowes for the entire race, the Briton taking his first podium finish of the year, closely followed by Pata Yamaha teammate Michael van der Mark.

Sandro Cortese brought a fourth Yamaha into the top seven, with Barni's Michael Ruben Rinaldi finishing as the second-best Ducati, 27.6s behind Bautista.

BMW's Tom Sykes had been up to fourth after the start but couldn't stay in contention for the top positions and settled for ninth, followed by Toprak Razgatlioglu (Puccetti Kawasaki).

Eugene Laverty crashed at the final turn early in the race, while Chaz Davies - who continued to struggle with the Ducati Panigale V4 R - also had a fall at Turn 3.