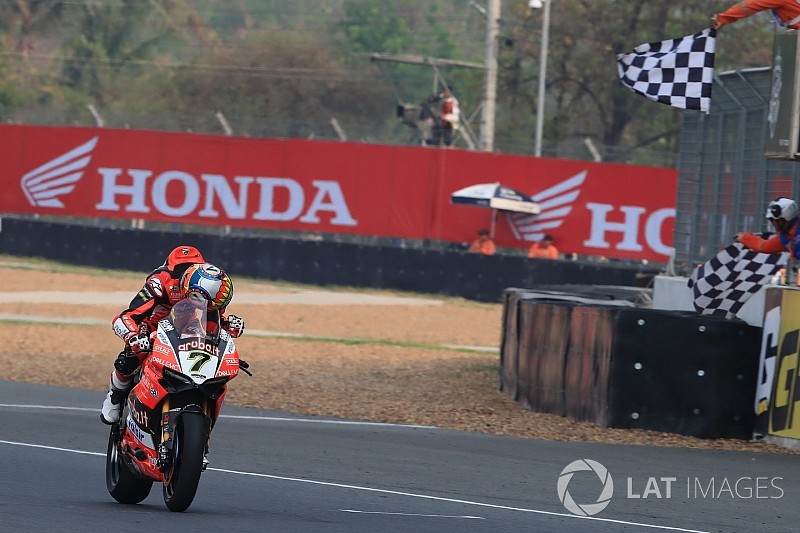 Chaz Davies took his first and Ducati's third win of the 2018 World Superbike season on Sunday at Buriram, as both Kawasaki riders endured a tough race.

Starting from seventh on the grid, it took Davies eight laps to take the lead with Yamaha riders Michael Van der Mark and Alex Lowes taking turns out front prior to that.

Van der Mark managed to keep up with Davies once the latter got ahead, but the Dutchman eventually lost ground and the Ducati rider ended up taking the chequered flag by 2.1 seconds.

Lowes completed a double podium finish for Yamaha in third, followed by Jonathan Rea on the best of the Kawasakis.

Rea, who dominated Race 1, was in the leading group early on but lost time after running wide several times.

While he salvaged fourth place thanks to a late move on the Barni Ducati of Xavi Fores, he finished the race a full six seconds behind Davies.

The reigning champion's teammate Tom Sykes had an even worse race as he quickly dropped out of the top 10 despite starting from third position, and the Briton eventually retired in the pits.

Fores was fifth ahead of pole-sitter Leon Camier (Honda) and Marco Melandri (Ducati), who only managed to finish one place better than he did in Race 1 with seventh.

The Italian has conceded the championship lead to Rea as a result, but he is only two points behind.

Eugene Laverty and Jordi Torres both crashed at Turn 6 on the fourth lap and were taken to the medical centre for check-ups.

Buriram WSBK: Rea cruises to first win of the season