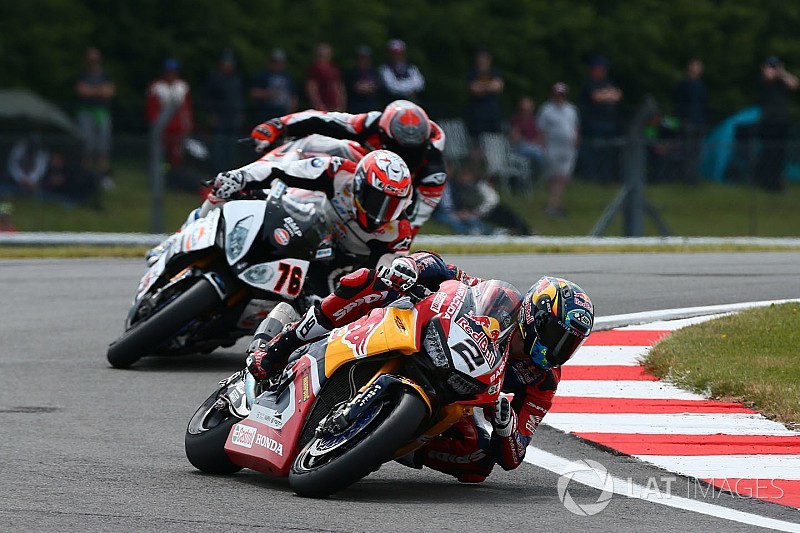 Leon Camier says the Ten Kate Honda team "made massive progress" with the bike's electronics during the Donington Park World Superbike weekend and expects this to help him "a little bit everywhere".

Honda has had a torrid time in WSBK since it introduced its new CBR1000RR bike last year.

The team started 2018 with a brand new line-up of Camier and Jake Gagne but, six rounds into the season, both riders already skipped races due to injury, and Honda's best result is fourth in Thailand.

The UK round last time out was the first time Camier has completed a full weekend on the Magneti Marelli electronics package the team switched to at Aragon, having missed the previous six races.

Despite riding injured, Camier was eighth and 10th in the races, and feels Honda "made massive progress" with its electronics in one weekend.

"I feel in one weekend we've made massive progress," he said.

"We spent a lot of time on the computer, trying to pinpoint everything and make it as accurate as possible, change the shape of the way the traction control works, really detailed stuff.

"I still think there's some room to improve with the TC [traction control], but in general it was working good."

Camier's absence has meant development work on the new electronics package has been left to rookies Gagne and Triple M rider PJ Jacobsen.

The Briton admits he has no idea what the American duo have been doing with the bike, but feels it's vital he is present to "steer where it's going".

"The biggest thing has been me being on the bike just to understand where the electronics are at, and try and develop them how I want," said Camier.

"It's difficult, because for sure I feel me being on the bike, I can direct how the electronics are working more and how I want things to work.

"So it's better for me to be on it, but I don't know if Jake or PJ are using my setting or not. I don't know what they've been up to, I've not really been checking.

"But for sure I feel I need to be on it to steer where it's going at the minute.

"I think the more detailed I can be, the more my electronics guys understand how I want it, and compare it.

"So when we go to Brno, we probably won't start that much better, but they can get it better quicker, and we can come up with a better setting.

"The thing we've got to do now is still try and develop the way the traction control works a little bit, the way it sort of cuts, seeing when it kicks in that it doesn't kill it [the power] too much in the right areas.

"It's so hard to make it to be accurate with it, and it needs laps for the technicians to set it good. But now they know what I'm looking for more, I think they can do it."

Puccetti to retain rookie Razgatlioglu for 2019