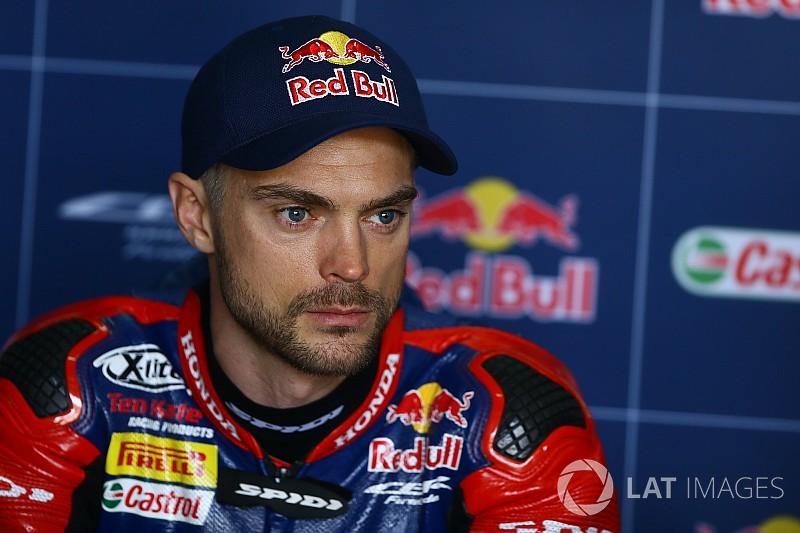 Honda World Superbike rider Leon Camier will sit out the second race of this weekend's Aragon round after being diagnosed with fractured ribs as a result of a crash in Saturday's opener.

Camier was involved in a three-bike melee at Turn 11 in the opening laps of the first race along with Lorenzo Savadori and Jordi Torres that brought out the red flags.

While Savadori and Torres escaped unharmed, Camier was taken to hospital in nearby Alcaniz, having been reported by his Honda team to be "conscious" but "in some pain".

A statement issued by the Ten Kate-run outfit later confirmed Camier will be forced to sit out Sunday's Aragon race after sustaining three fractured ribs and a lung contusion.

"Leon was attended to by Clinica Mobile staff at Motorland Aragon circuit and afterwards was sent to Alcaniz Hospital for further assessment," read the statement.

"Following the hospital’s prognosis, the Red Bull Honda World Superbike Team can confirm he will not participate in Race 2 of the Aragon WorldSBK round.

"Leon has been diagnosed with a closed chest injury: a fracture of the posterior ribs 9, 10 and 11 on his left side with a lung contusion. His condition is stable."

Former British Superbike champion Camier is now in a race to be fit for the fourth round of the season at Assen, which takes place next weekend on 20-22 April.