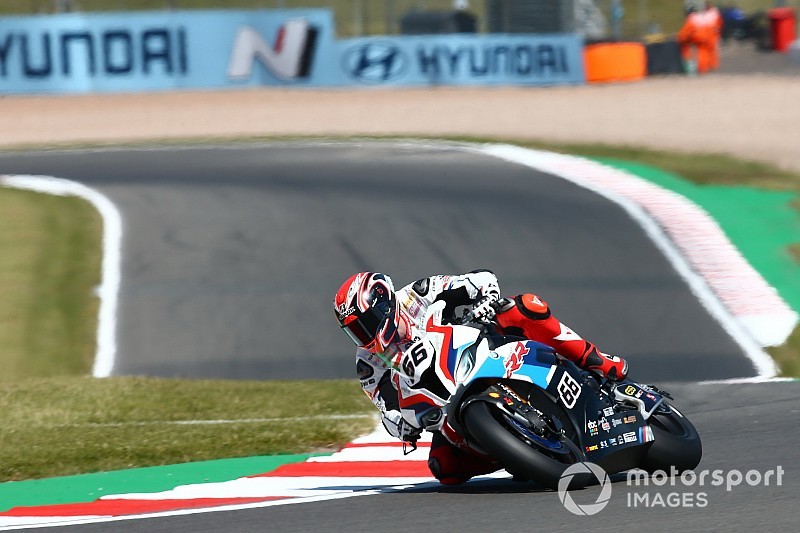 BMW World Superbike rider Tom Sykes led the timesheets at the end of Friday practice ahead of Alex Lowes at Donington Park, after topping both sessions on the S1000RR.

Nine-time Donington race winner Sykes set the pace early on in the morning session, firing in a best of 1m27.790s after 15 minutes of running.

He remained unchallenged through to the chequered flag, with Pucetti Kawasaki's Toprak Razgatlioglu his nearest challenger on a 1m28.167s.

FP1 proved a low-key session for championship protagonists Jonathan Rea and Alvaro Bautista, with the pair only eighth and 11th respectively.

Sykes once again established himself as the man to beat in the opening runs of the second session, going top first with a 1m28.020s, before improving to a 1m27.851s.

Most inside the top 10 - except for Sykes, Yamaha's Michael van der Mark and Jordi Torres (Pedercini Kawasaki) - had improved on the combined times, with Lowes brushing off a crash at the end of FP1 to shadow the BMW rider.

Rea made a substantial improvement of six tenths on his FP1 best to leap up to third overall, with KRT teammate Leon Haslam and Razgatlioglu occupying the rest of the top five at mid-distance.

With 13 minutes of FP2 remaining, Sykes finally bettered his existing best lap with a 1m27.733s, though was only 0.042s clear of the field when Razgatlioglu moved into second.

Yamaha rider Lowes cut Sykes's advantage further to just 0.018s on his final lap, but the BMW man held onto top spot as the chequered flag brought the session to a close.

Razgatlioglu crashed at Goddard's at the end of FP2, but remained third-fastest and top Kawasaki runner ahead of works duo Rea and Haslam.

Bautista found 1.2s on his FP1 time in the afternoon to end Friday sixth-fastest with a 1m28.005s on the first of the Ducatis, with GRT Yamaha's Sandro Cortese and Ten Kate's Loris Baz following him to round out the top eight.

Chaz Davies (Ducati) led Torres to complete the top 10, with van der Mark the only rider in FP2 not to improve on the combined times in 11th.

The Yamaha rider suffered a fracture to his right wrist in a heavy fall at the end of FP2 at Misano, but was passed fit to continue at Donington following further medical checks after the morning session.

Five-time Isle of Man TT winner and BMW substitute Peter Hickman ended his first WSBK outing since 2012 eight tenths off the pace in 12th, edging ahead of the GRT Yamaha of Marco Melandri – who had crashed in FP1.

Go Eleven Ducati rider Eugene Laverty made his return from breaking both wrists at Imola on Friday at Donington, and ended the day 2.6s off the pace in 18th and last spot.

BMW calls up Hickman for Donington WSBK round