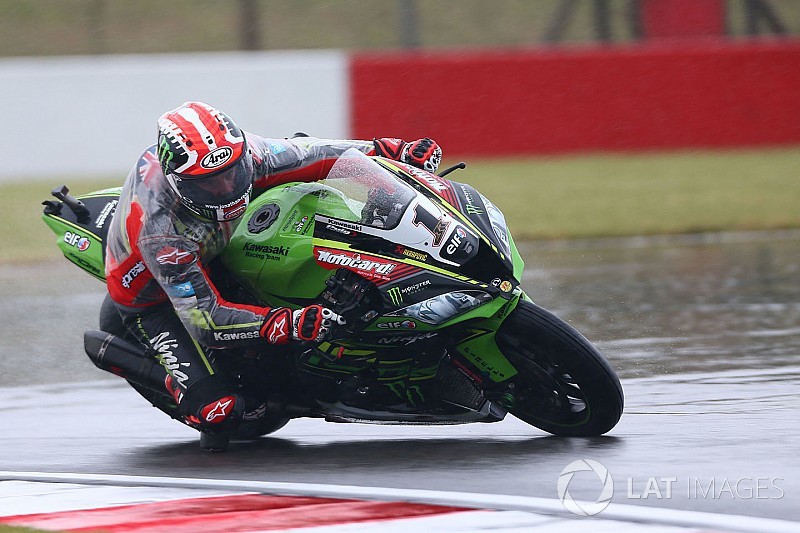 Jonathan Rea headed Kawasaki teammate Tom Sykes on a rain-hit World Superbike Friday at Donington, while a crash in FP3 dropped Chaz Davies out of the SP2 places.

Despite only emerging from pitlane for the final 10 minutes of a soaked first practice, Rea managed to go over half a second clear of teammate and long-time FP1 leader Sykes with a 1m44.229s.

Althea BMW's Loris Baz completed the top three ahead of Ten Kate Honda's Leon Camier – who will have his fitness assessed after Saturday's FP4 as he continues his recovery from injury – and Orelac Kawasaki's Leandro Mercado.

Sykes and Rea once again traded top spot in a damp second session, with the Yorkshireman – who has won nine of the last 10 races at Donington – casting Rea almost six tenths adrift with a 1m38.593s lap.

Yamaha's Alex Lowes leapt up to third in the closing stages ahead of Camier, while wildcard Gino Rea managed to get his British Superbike-spec Suzuki into the top 10 – though would ultimately end the day down in 21st.

A dry track greeted the riders for the final session of the day at Donington, and once more Rea and Sykes spent the 40 minutes debating top spot on their ZX-10RRs.

With 25 minutes remaining, Sykes returned to the top of the pile with a 1m28.751s, though Rea obliterated this by half a second just under 10 minutes later.

Sykes tried again to secure top spot in practice with a 1m28.207s in the closing stages, but a final effort of 1m28.003s put Rea 0.204 seconds clear of the Yorkshireman at the chequered flag.

Lorenzo Savadori put his Milwaukee Aprilia into third ahead of Lowes, while Eugene Laverty made it two RSV4s inside the top five in fifth.

Haslam's fellow BSB wildcard Bradley Ray leaped up to ninth in the closing minutes of FP3 to secure direct passage into SP2 on his WSBK debut, while Luke Mossey – replacing Yonny Hernandez at Pedercini this weekend – missed joining his BSB rival in SP2 by just 0.004s to Ducati's Marco Melandri.

Melandri is so far the only Ducati rider contesting SP2, as crashes for teammate Davies and Barni Racing's Xavi Fores at Redgate left them 16th and 23rd respectively.

Jordi Torres was unable to set a laptime in FP3 after his MV Agusta expired on the run into the Fogarty Esses at the start of the session.

Opinion: Why Sykes should swap Kawasaki for Yamaha