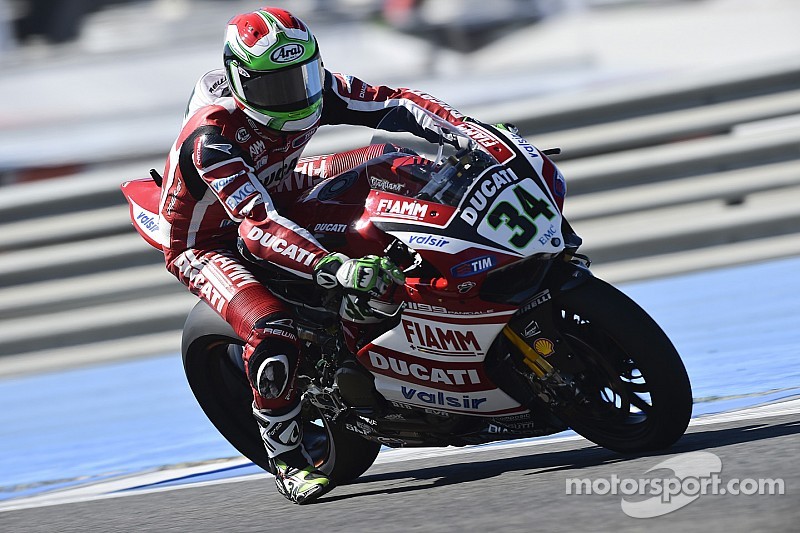 The second time this year for Davide Giugliano as pole sitter.

Doha (Qatar) – The first ever floodlit Tissot-Superpole has been won by Ducati Superbike Team’s Davide Giugliano, who will line up for tomorrow’s two 17 lap encounters alongside Loris Baz and Tom Sykes (Kawasaki Racing Team), who will join him on the front row.

This is the second time this year for Giugliano as pole sitter, the third one so far in his WSBK career. The Italian rider clocked in 1’57.033 to set the new best lap of the track.

Davide Giugliano: “I’m very happy. For me it was important to be on the front row. The fast lap and being faster than Ben Spies is good for us but it’s more important to be consistent over race distance. Yesterday it was difficult but I’m happy with all my team, they are working very hard. In my heart I want to win, but after the recent races it’s important for me and important for Ducati to have two strong races tomorrow.”

Tom Sykes: “It was not the easiest day yesterday but It means nothing being fast on the Friday. We were working towards tomorrow. I have a game plan and me the whole Kawasaki Racing Team are working for this. Of course I’m here to win races, but it’s more important to win the championship.”

Wildcard rider Alex Cudlin (Team Pedercini Kawasaki - EVO) will make his WSBK race debut starting from 16th on the grid whilst Geoff May, who put the Team Hero EBR machine into Superpole for the very first time, will move off from the 19th position.

Sylvain Barrier (BMW Motorrad Italia - EVO) suffered a huge highside in the final moments of the first Superpole session bringing out the red flag. The Frenchman was taken to the medical centre for precautionary checks and his conditions will be reviewed before tomorrow’s warm up.