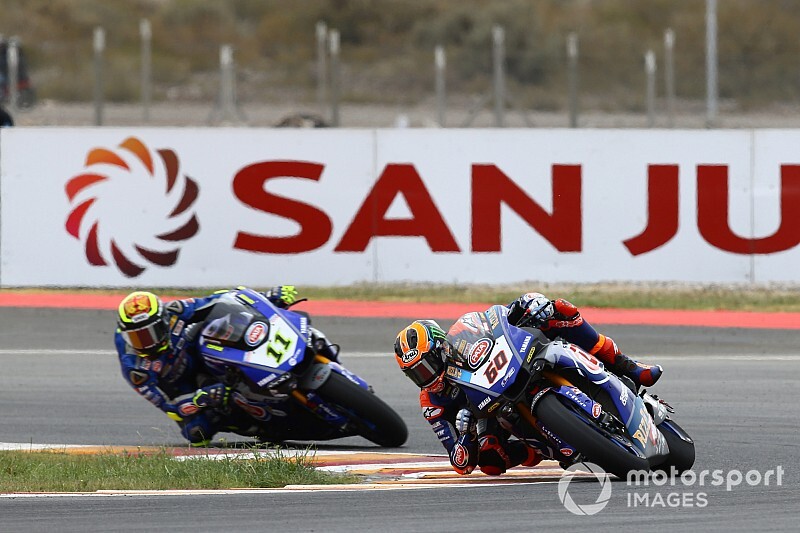 The GRT squad stepped up to WSBK this year having previously raced in WSS, with Marco Melandri and reigning Supersport champion Sandro Cortese as its riders.

Melandri will retire from racing at the end of the year, while Cortese’s future remains uncertain at present despite a strong rookie campaign aboard a works-backed YZF-R1.

Caricasulo, who is fighting for the WSS title for the Evans Bros team, has long been linked to a GRT move in WSBK for next year, while American Gerloff had links to GRT and Ten Kate.

The team will also be renamed as the GRT Yamaha WorldSBK Junior Team.

"I'm happy to welcome Federico and Garrett to our WorldSBK program, as both earned this opportunity through their achievements aboard Yamaha machinery in two very different championships,” Yamaha manager Andrea Dosoli said.

“Both are young, talented and determined to succeed in the premier production class and Yamaha is fully committed to helping them realise their true potential during the 2020 season.

“Federico and Garrett will both ride for the retitled GRT Yamaha WorldSBK Junior Team that, having benefitted from running the vastly experienced Marco Melandri this year, is ready to fulfil this strategic role within Yamaha's rider development program under the direction of Team Manager, Filippo Conti.

“I wish both riders every success for the 2020 season, as they embark on their WorldSBK debut season."

Caricasulo is just eight points behind teammate Randy Krummenacher ahead of this weekend’s WSS final in Qatar, having amassed three victories across the campaign.

Gerloff is one of the hottest properties to have emerged from the MotoAmerica scene, having secured the SSP title in 2016 and 2017 before stepping up to the factory Yamaha effort in the SBK class the following season.

This season he finished third in the MotoAmerica SBK standings behind Cameron Beaubier and Toni Elias after scoring four wins and 15 points.

Cortese’s hopes of staying in WSBK seem remote, and the German is rumoured to be in talks with WSS teams for a potential return to the class in 2020.

Rossi to return for rest of European MotoGP weekend