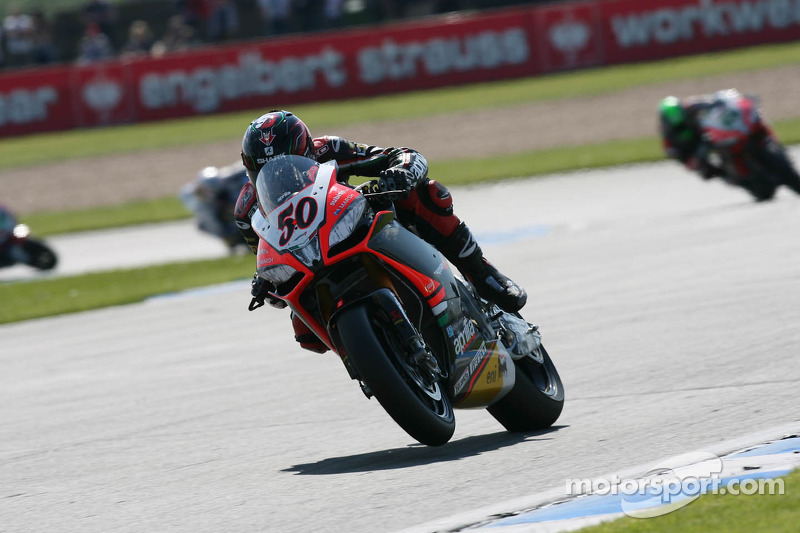 The FIM Superbike World Championship is back in action for the 9th round at Silverstone along with the World Supersport riders. It will be their first outing since the tragic death of Andrea Antonelli.

Rome (Italy), Tuesday 30 July 2013 - The eni FIM Superbike World Championship will be back in action this week for Round 9 at Silverstone, still mourning the loss of Italian rider Andrea Antonelli.

The Northamptonshire circuit made his WSBK return in 2010 with a completely new layout and, as it used to be back then, the series will be using the “old pits” and the start/finish straight between “Woodcote” and “Copse” curve.

Two technical problems, one during the Tissot-Superpole and the other on lap 4 of the only one WSBK race performed this year at Moscow Raceway, have left Tom Sykes empty-handed in the weekend when the one-year contract extension - between the Brit and the Akashi manufacturer- was made official. Sykes lies now 2nd in the standings, just 4 points behind Sylvain Guintoli (Aprilia Racing Team), who rode through the pain barrier to secure a sixth place under ever changing weather conditions – unlike the other works Aprilia rider Eugene Laverty, who fell off his RSV4 on the sixteenth lap and had to withdraw from the race.

Frenchman won race 2 at Silverstone one year ago - in the wet - after leader (and Race 1 winner) Loris Baz (Kawasaki Racing Team) crashed out, moments before the race was red flagged - and then ended. After winning at Moscow Raceway the 13th World Superbike race of his career, Marco Melandri (BMW Motorrad GoldBet) has narrowed the gap with the front down to 32 points. The Italian – as well as his team mate Chaz Davies - will try and keep the concentration up on the final goal, despite the fresh announcement by BMW regarding the future sporting plans of the German manufacturer.

Following the disappointing result of the 8 Hours race – despite a brilliant effort – Jonathan Rea (Pata Honda World Superbike) is looking forward to a good performance on the track that saw him finishing twice second in 2010 (behind Cal Crutchlow), while winner at Suzuka Leon Haslam hopes to bring some good momentum to his difficult season.

Ayrton Badovini (Team Ducati Alstare) scored his 2012 only podium place at Silverstone, by sliding along the finish straight - and over the line - in Race 1, after losing control of his BMW. The Italian targets another great result on the British venue after bringing the 1199 Panigale R to a long awaited maiden WSBK rostrum finish at Moscow Raceway. Carlos Checa won both races the year before, onboard the Ducati 1198.

The FIXI Crescent Suzuki Team – still looking for its first top-3 race finish in the season – aims to turn the page on a difficult first part of the season and to shine, in front of the home crowd, with its riders Leon Camier and Jules Cluzel.

As the fatal crash that led to the tragic loss of Andrea Antonelli brought to race cancellation at Moscow Raceway, World Supersport riders are about to face the ninth round of the season at Silverstone with the same standings positions as after late June’s race at Imola. Sam Lowes (Yakhnich Motorsport Yamaha) will try to maintain his 34 points margin over defending Champion Kenan Sofuoglu (Mahi Racing Team India Kawasaki).

The Turkish was 5th last year on the English track, after an outstanding recover following an early run-off into the gravel, while home rider was edged by former team mate Jules Cluzel at the chequered flag by only 0.157 seconds. Frenchman Fabien Foret (Mahi Racing Team India Kawasaki) aims to mix it up front, as well as Suzuka 8 Hours winning team member Michael van der Mark (Pata Honda World Supersport). Despite the injuries sustained after finding himself involuntarily involved in Andrea Antonelli’s crash, and the shock after it, Lorenzo Zanetti will be on track this weekend at Silverstone to race for the departed rival and friend.

Former British Supersport stars and WSS rookies Jack Kennedy (Rivamoto Honda) and Christian Iddon (ParkinGo MV Agusta Corse) are hoping for a strong performance on a track they both know very well. David Salom (Intermoto Ponyexpres Kawasaki) joins back team mate Luca Scassa after missing the last round in what’s been so far a very tough season (the Spaniard has only two races under his belt in 2013).

AARK Racing Team has decided to switch to Honda for the rest of the season, meaning Australian Mitchell Carr will be riding a CBR600RR – after racing a Triumph Daytona 675 for eight rounds.

Melandri and Davies head to Silverstone with determination