Guintoli wins Race 1 and narrows the gap to championship lead 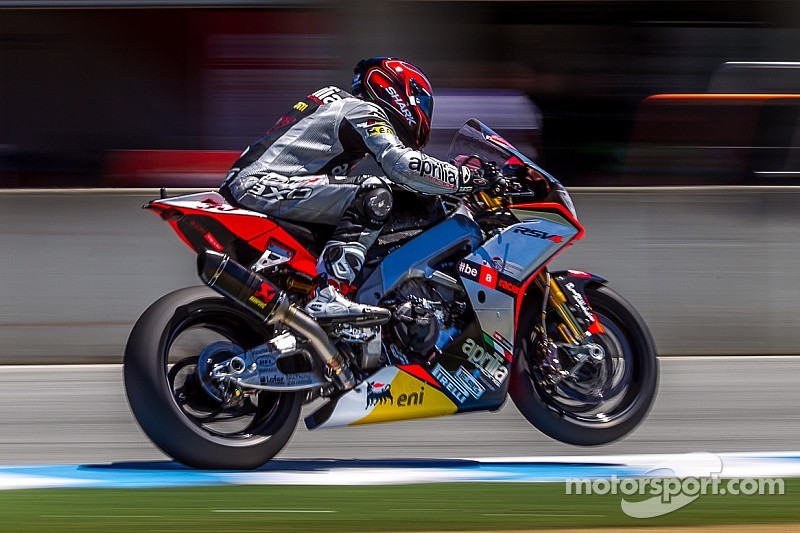 Because of the weather, the race distance was reduced to 19 laps.

Magny-Cours (France), Sunday 5 October 2014 – Local rider Sylvain Guintoli (Aprilia Racing Team) has won Race 1 in front of an enthusiastic crowd by edging out at the finish line his teammate Marco Melandri. Thanks to his 3rd win of the year, the 32 year old Frenchman narrowed the gap to series leader Tom Sykes (Kawasaki Racing Team), 4th at the flag, to 19 points. Jonathan Rea (Pata Honda World Superbike) scored a well deserved third place ahead of KRT duo of Sykes and Baz.

Because of the weather, the race distance was reduced to 19 laps and after a number of riders fell in the warm up session, the opening laps were very tentative for several riders.

In the early laps it was Rea who led the way with the spray making it extremely difficult for the mid-field riders. Behind him Sylvain Guintoli (Aprilia Racing Team) gave chase after passing Tom Sykes (Kawasaki Racing Team) at the end of lap 1.

Guintoli was soon ahead of Rea and the Frenchman began to ease away, much to the delighted French crowd who were also braving the conditions.

By one third distance the Aprilia at the front was Guintoli was ahead of the chasing pack with now Marco Melandri playing shotgun to his team mate ahead of Loris Baz who had also overhauled Sykes and Rea who began to lose touch with the leaders.

With five laps to go Melandri had closed to within a second and the Aprilia duo were left to fight it out for the win with the victory eventually going the way of Guintoli after it appeared that Aprilia team orders intervened.

Melandri edges out Guintoli for the win in Race 2