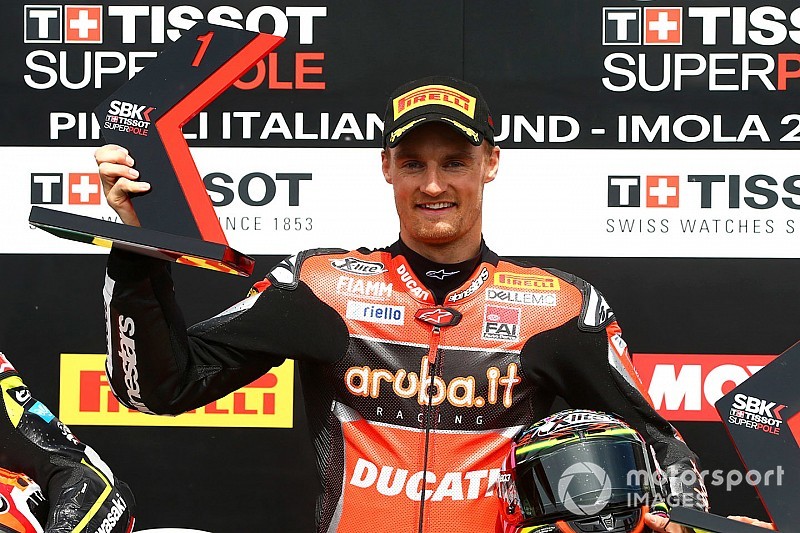 The session was first suspended less than a minute after riders had headed out of the pits for the first time, as Michael Ruben Rinaldi crashed at the Villeneuve chicane.

Rinaldi's Barni-run Ducati developed a mechanical problem, with smoke billowing out as he approached the corner, and he was thrown off his Panigale V4 R in the second part of the chicane.

The incident required a clean-up and track inspection, and the subsequent red-flag stoppage lasted over 10 minutes.

When it did restart, the out-lap brought another red flag right away as GRT Yamaha's Sandro Cortese and Honda's Leon Camier crashed at Tamburello.

The session proceeded without further disruption once back underway, and it was points leader Bautista who set the initial benchmark at 1m46.328s.

But Jonathan Rea was quicker right away, surpassing his own previous fastest lap of the weekend with a 1m45.754s that kept him comfortably top until the late-session qualifying-tyre runs.

With five minutes left on the clock, Rea improved to a 1m45.307s, while his works Kawasaki teammate Leon Haslam demoted Bautista to third.

But as Rea returned to the pitlane, Davies fired in a 1m45.180s to snatch first place away from the reigning champion.

His teammate Bautista then jumped back ahead of Haslam for a spot on the front row, but his lap was some nine tenths slower than Davies' pole benchmark.

Yamaha's Alex Lowes, who has been suffering with illness in Imola, finished as the best of the rest behind the factory Ducatis and Kawasakis in fifth place.

He narrowly headed the top BMW of Tom Sykes, who pipped stablemate Markus Reiterberger to sixth at the chequered flag.

Michael van der Mark was eighth on the other works Yamaha, ahead of Pedercini Kawasaki rider Jordi Torres and Cortese, who secured a top-10 spot in the dying seconds despite his earlier crash.

Like Cortese, Rinaldi also rejoined the session but could only take 17th, while Camier did not participate further, having been taken to the medical centre for a check-up after his accident.

There Camier was declared unfit to participate in the race, and he was subsequently transported to the local hospital in Imola.

Ducati wildcard Lorenzo Zanetti was 13th in his first World Superbike qualifying, three places up on Tommy Bridewell, who is serving as stand-in for the injured Eugene Laverty at GoEleven Ducati.