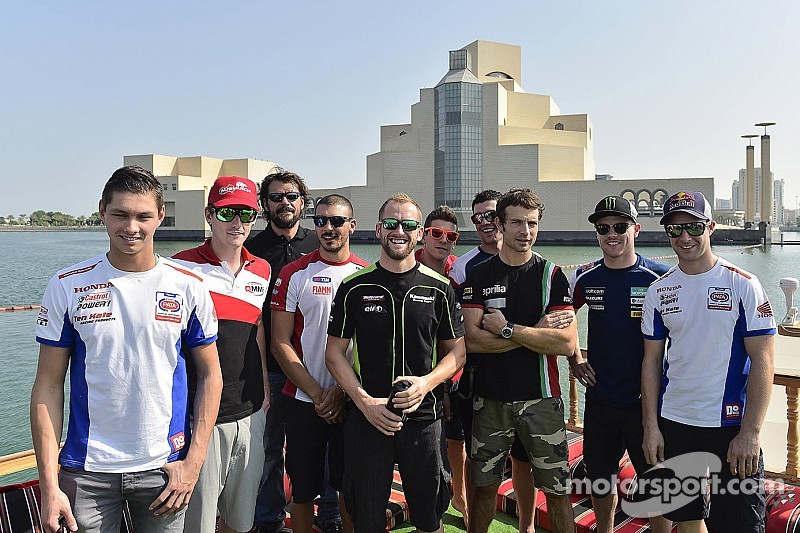 Doha (Qatar) - Tom Sykes, Sylvain Guintoli, Jonathan Rea, Davide Giugliano, Alex Lowes, Sylvain Barrier, Claudio Corti, Aaron Yates and 2014 WSS Champion Michael van der Mark were joined by four time Qatari Superbike champion Alex Cudlin for a boat ride on a typical Dhow vessel that began at the famous Corniche in Doha, taking in some of the impressive landmarks of Qatar, before ending with a photoshoot in front of the Islamic Museum.

The event began in style with Claudio Corti trying to throw one of the championship contenders, Guintoli, overboard which would have made Sykes' weekend slightly easier.

With everybody watching the comedy moment, nobody realised how close to the sand banking the vessel was and moments later, the boat which was now in the middle of the Dhow Corniche, sailing alongside the impressive Doha skyline, lost the front end, and ran aground sending all the passengers off balance.

Title rivals Tom Sykes and Sylvain Guintoli had a "minor collision" on the starboard side, but were soon all smiles again after some swift intervention by the coastguard who came to the rescue.

The riders were then returned to the track for a night time familiarisation session ahead of tomorrow's opening practice sessions for both World Superbike and World Supersport categories.

This weekend’s event at the Losail International Circuit will see history being made, as the stars of Superbike do battle for the first time under floodlights at the circuit that last hosted the series in 2009.

With only 12 points separating reigning Champion Tom Sykes and his only title rival Sylvain Guintoli anticipation in the desert is building - there are just two races and a total of 34 laps to decide the 2014 victor.