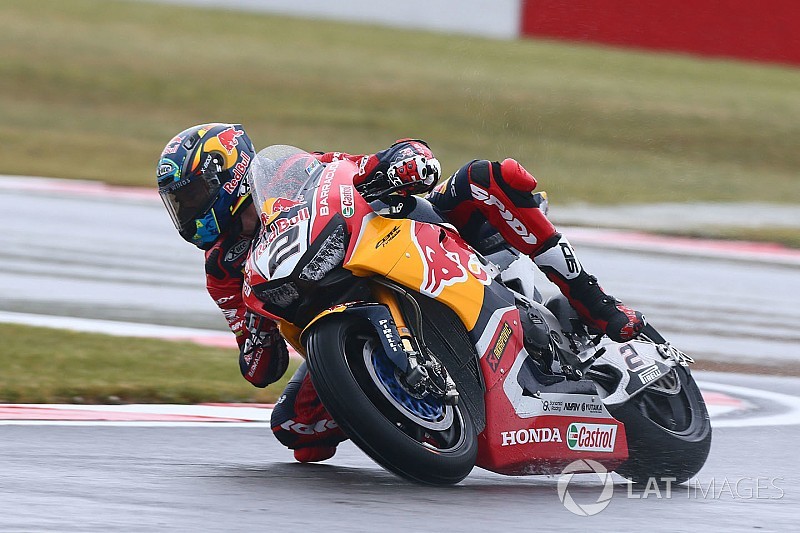 Ten Kate Honda's Leon Camier says he is “not good” physically after Friday's World Superbike practice at Donington Park, and is unsure if he be able to race on Saturday.

Camier suffered three broken ribs and a lung contusion in a horror crash at Aragon, and missed the Dutch round, while withdrawing after two session at Imola two weeks ago.

The Briton completed all three 40-minute sessions at Donington on Friday, and was 13th overall, 1.4-seconds off the pace, having spent much of final practice inside the top 10.

However, Camier admits he was “getting worse and worse” with each run in the final session, and says he is struggling to be “precise” changing direction and to push under braking.

“Some points in the session weren't too bad, like the laptime was not too bad, when I can sort of flow,” Camier, who will undergo further medical assessment after FP4, said.

“But the more laps, the more you try to attack, try to push the worse it is. The last laps [in FP3], I didn't go any quicker and I was trying harder and not a lot happening.

“So it's a tricky one. For sure I'm not good, I'm not precise on change of direction, I'm not strong, and on the brakes as well I'm not particularly good.

“But I'm getting it round, just not as fast as I would like to be. But all considering, we were in top 10 for most of the session, it's not bad.”

When asked if he would be able to complete a race distance, Camier admitted he wasn't sure, but says if he does race he won't consider only completing half of it.

“I don't know. I'm gonna try again tomorrow, see how I pull up after tonight and how it goes in the morning," he said. “But it's really session by session at the minute.

"I've got to see the doctors again, [they are] going to see me tomorrow morning, because even throughout the session I'm getting worse with every run.

“I did quite a few laps the first run, and then second run I think I did only five or six laps, then the last one only two laps, and I'm like struggling more and more throughout the session.

“So it's definitely not easy. If I do the race I'm gonna try and finish it for sure. There's no point starting to ride around and come in really, [because] it's only really risking for what benefit?

“So, I'm gonna try and if I can finish the race, and do the best I can and stay out of trouble at the same time.

“The problem is, the further back you are you're riding with people you don't really know, maybe people are risking more to maybe try and prove something, beat you, whatever.