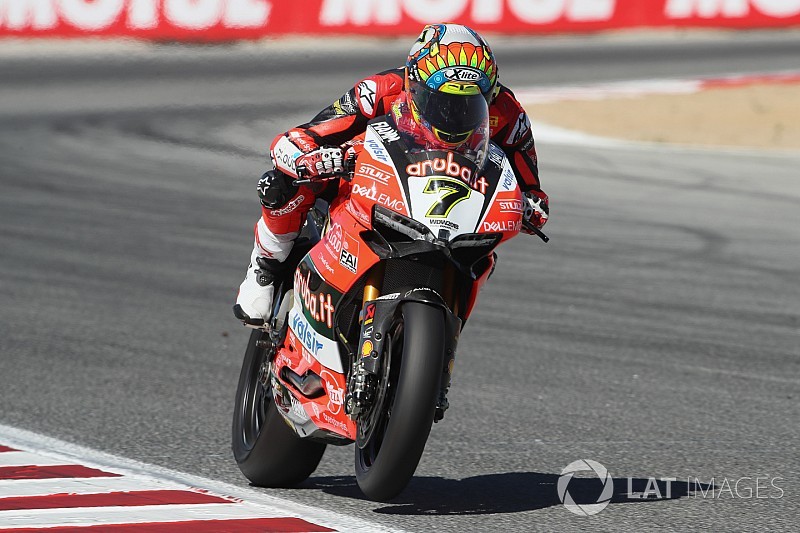 Chaz Davies snatched his first World Superbike pole of the season by just 0.015 seconds from Tom Sykes for race one of the US round at Laguna Seca.Q

Friday practice pacesetter Jonathan Rea set the early pace on race tyres in SP2 with a 1m23.257s, though the Kawasaki rider was usurped by Milwaukee Aprilia's Eugene Laverty with a 1m23.075s.

Laverty set the qualifying tyre benchmark at 1m22.718s in the closing minutes of the session, with Yamaha's Alex Lowes just 0.011s adrift in second.

Davies, who topped FP4 earlier on Saturday, took over top spot with just under a minute remaining with a 1m22.282s, with Sykes slotting into second by just 0.015s.

The top three were all going faster again on their final laps, but yellow flags for Loris Baz's crash at the Corkscrew denied anyone the chance to improve, securing Davies his first pole since the Imola round last year.

Sykes remained ahead of KRT stablemate Rea to round out the front row, while Laverty headed row two from Lowes and Lorenzo Savadori on the second Aprilia.

Marco Melandri was caught out by traffic on his initial race tyre laps, and was unable to improve on 10th in the closing stages of SP2 thanks to Baz's crash.

MV Agusta's Jordi Torres was just two hundredths shy of the Ducati man in 11th, while Baz, who also came through SP1, will start 12th having failed to set a time in SP2.

Toprak Razgatlioglu came close to progressing through to SP2 on his Puccetti Kawasaki after setting session-fastest first and second splits, but missed out by just half a tenth in 13th.

Leandro Mercado briefly led the times in SP1 in the opening stages, but will start from 14th ahead of debutant and MotoAmerica wildcard Josh Herrin, who was unable to better 15th after encountering an issue with his Attack Performance Yamaha in the second part of SP1.

Rea could win in MotoGP "with time", says crew chief