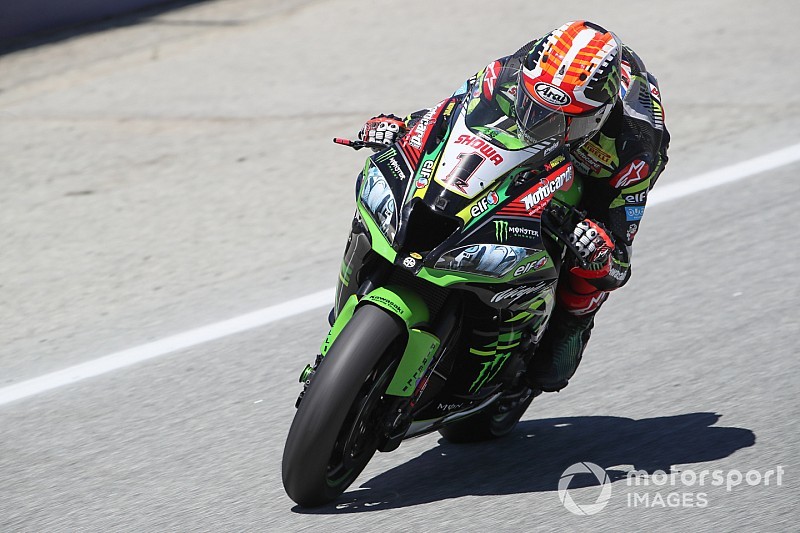 Jonathan Rea eased to his 80th career World Superbike win in a red-flagged Superpole race at Laguna Seca, while Alvaro Bautista crashed for the second time this weekend.

The original 10-lap sprint contest was stopped at the start of the second tour after Althea Honda's Alessandro Delbianco collided with wildcard JD Beach (Attack Performance) at the Corkscrew on lap one.

Both were unharmed, but did not make the restart, while Ducati's Bautista was also a non-starter.

Bautista crashed out at the Andretti hairpin in the original start after making contact with the rear of Toprak Razgatlioglu’s Puccetti Kawasaki.

The erstwhile championship leader did get his damaged Ducati back to his garage to be repaired, but did not make the restart having gone to the medical centre for precautionary checks.

Chaz Davies got the holeshot from second on the grid in the original start, but it was poleman Rea who grabbed the advantage second time around.

The Kawasaki rider – who was the only person not running the SCX tyre - quickly opened up an advantage of close to a second by the end of the opening tour, and eased to his ninth win of the campaign to open up a 61-point lead over Bautista.

Davies took another second-place finish at Laguna Second, coming under no threat from BMW's Tom Sykes, who trailed him by 1.1s in the end.

Razgatlioglu dispatched of Kawasaki stablemate Leon Haslam at the Corkscrew with three laps to go, but could do nothing to close down the 1.2s gulf splitting him and Sykes over the final two tours.

He was fourth at the chequered flag, with Haslam and Yamaha's Alex Lowes completing the top six. Loris Baz (Ten Kate), Pedercini's Jordi Torres and Orelac's Leandro Mercado rounded out the top nine to secure the remaining points.

Rea will start this afternoon's second feature race from pole position ahead of Davies and Sykes, while Bautista will launch from a distant 10th.