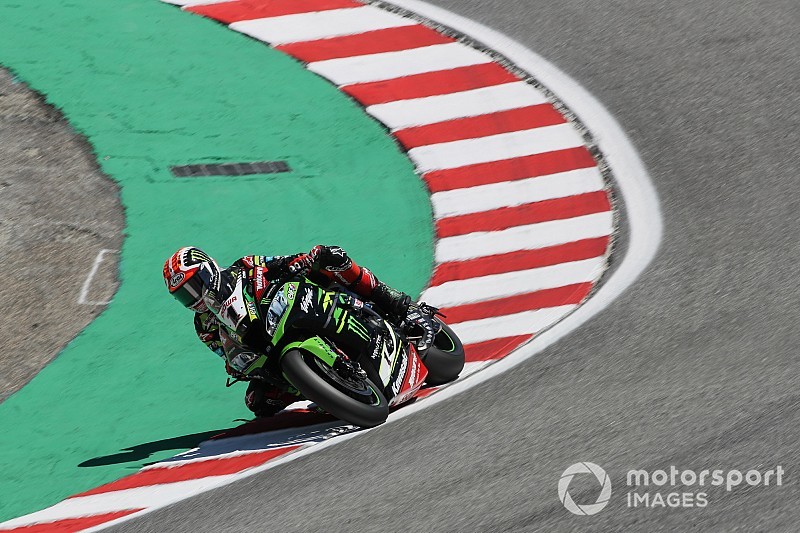 Championship leader Rea fitted the qualifying tyre to his Kawasaki earlier than is typical in the 25-minute session, and sealed his fourth pole of the campaign with a 1m21.876s lap.

The session was brought to a halt after Ten Kate's Loris Baz crashed his Yamaha at the bottom of the Corkscrew in the opening stages and puncturing the air fence, prompting a red flag while the barrier was prepared.

Toprak Razgatlioglu set the initial pace on race tyres just prior to the stoppage with a 1m23.079s on the Puccetti Kawasaki, with works rider Rea just 0.001s adrift.

Ducati's Alvaro Bautista took over from Razgatlioglu when the session got back underway with a 1m23.046s, before Rea edged ahead by 0.082s.

Rea took to the circuit with eight minutes remaining for his run on the qualifying tyre, with his sole effort on the compound good enough to go a second clear of the field.

Bautista was the next frontrunner to fire in his qualifying tyre time, but his 1m22.048s was only good enough for a provisional second.

Bautista held onto third, marking just the second time this year he has been outpaced by Davies in Superpole, while BMW's Tom Sykes headed the second row ahead of the second KRT bike of Leon Haslam.

Jordi Torres guided the Pedercini Kawasaki to sixth, pushing Razgatlioglu down to seventh ahead of lead Yamaha rider Alex Lowes.

Ten Kate sensationally managed to get Baz back out on track late on, and he was just a tenth adrift of factory Yamaha counterpart Lowes in ninth.

Eugene Laverty, who pulled out of racing at Donington Park last week due to his injured wrists continuing to cause him discomfort, returned to action at the US round and completed the top 10 on the Go Eleven Ducati.

Michael van der Mark (Yamaha) crashed just after the session was restarted, which left him in 15th ahead of wildcard JD Beach on the Attack Performance-run R1.