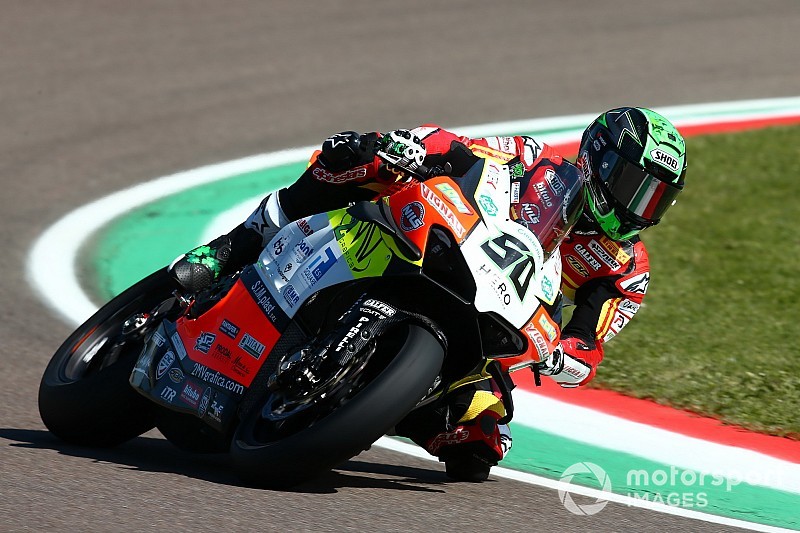 World Superbike rider Eugene Laverty aims to return to racing at Misano in a month's time, following surgeries on both of his wrists after his Imola crash.

Laverty broke both of his wrists in the opening practice session at Imola, the Irishman consequently withdrawing from the event.

The former MotoGP rider underwent surgery on his right wrist the next day in Barcelona, and then om his left three days later.

"When I injured my left wrist previously in 2015 I traveled to Barcelona to be operated on by Dr. [Xavier] Mir," said Laverty.

"He did a great job then and so this time with a badly fractured right wrist I knew that he was quite simply the best man for the job.

"My wife Pippa and our friend Sarah drove me through the night to Barcelona in time for my surgery on Saturday morning.

"Thankfully Dr. Mir was able to repair my right wrist without compromising the joint movement which is very important for a motorcycle racer’s throttle hand.

"In all there were seven fractures across the radius, ulnar styloid process and scaphoid of the right wrist.

"After the first surgery I was able to relax a little as I wasn’t as worried about the surgery on the left wrist and first metacarpal on Tuesday."

Laverty will skip the next WSBK round at Jerez, but plans to return at Misano, which will take place between 21st and 23rd June.

"I watched the races from Imola in my hospital bed and dreamed about what might have been.

"I have a fantastic bike in the Ducati V4 R and together with Team Go Eleven I aim to return to Misano and continue our fight towards the podium."

Laverty joined the GoEleven Ducati team for 2019 and scored 32 points in the first five rounds of the season with two sixth places at Aragon as his best result.

It's Laverty's second big injury in two years as the Irishman broke his pelvis in Thailand, but he returned after skipping just two rounds.

British Superbike regular Tommy Bridewell replaced Laverty in Imola, finishing 12th and 11th in the two races that were held.

WSBK's next round, scheduled for June 7-9 on Jerez, does not clash with Bridewell's main BSB programme.