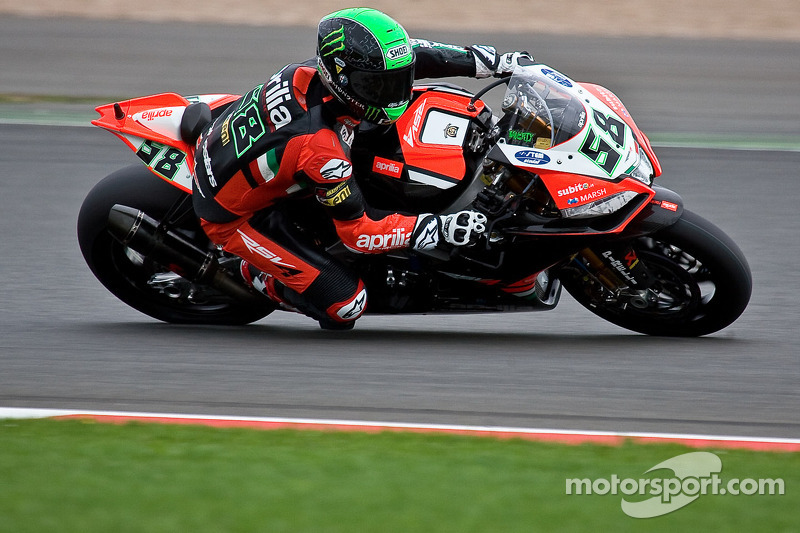 Lowes edges over Rolfo and Sofuoglu for World Supersport pole

Eugene Laverty (Aprilia Racing Team) has claimed his second Tissot-Superpole of the year - and of his WSBK career - today after a close battle with Tom Sykes (Kawasaki Racing Team). The Irishman put in a fast lap of 1'40.620, edging the Championship leader for just 0.048s. The first row on the grid for final two races of the year is completed by Davide Giugliano (Althea Racing Aprilia), who is keen to play his part tomorrow after the consistently good performances of the first two days at Jerez.

The top-3 riders in Tissot-Superpole were joined at the SBK Paddock Show press conference by Spaniard Carlos Checa, who made official earlier today his retirement from racing and will keep staying with Ducati as an official ‘ambassador’.

Marco Melandri (BMW Motorrad GoldBet) rode his factory S 1000 RR up to fourth place, with Sylvain Guintoli (Aprilia Racing Team) and Toni Elias (Red Devils Aprilia) to follow. The Spanish rider had a crash at Turn 2 during the third Superpole session, with five minutes left, that ruined his chances of getting a better starting position.

Leon Camier (FIXI Crescent Suzuki) continued to impress on his WSBK return and, despite not being 100% fit, he secured the 7th slot on the grid over local rider Xavi Forés (Team Ducati Alstare) and Mark Aitchison (Team Pedercini Kawasaki). The Australian rider got his best-ever qualifying result today and a well-deserved 3rd row start.

Eugene Laverty: “Considering the gap behind Sykes, my only chance this weekend is to win both races. Starting ahead of the rest on the grid will definitely make that easier! Tomorrow I'll try to get off the line well and give it my all during the race. Sykes will also be starting from the front row and he'll definitely be trying to make his play to try and stop me, so that should make the races fairly interesting for the fans.”

Tom Sykes: “I would say it was possible to make pole today but we had a little hiccup and there was no need to test the boundaries again. We want to get a good clean start if we can tomorrow, get stuck in and see what happens. I am quite happy with our race set-up and the only thing I am trying to think about is trying to win the races. The conditions do change between races, but I am sure every guy on the grid has taken that into consideration. Over race distance of 21 laps, I am happy.”

Sam Lowes (Yakhnich Motorsport Yamaha) grabbed his 9th pole position of the year - out of 13 rounds - after a blistering final lap at the Circuito de Jerez in Qualifying 2. The Lincoln-born rider, who clinched the title two weeks ago at Magny-Cours, clocked in 1'43.118s and he is now looking forward to end his dream season in great fashion. Italy's Roberto Rolfo (ParkinGO MV Agusta Corse) was in the best position to secure the first pole start of his WSS year, before eventually settling for second place.

The Red Flag was waved once due to the crash suffered to WSS debutant Fraser Rogers (Complus SMS Honda).