Eugene Laverty says Jonathan Rea’s decision to take part in Saturday’s World Superbike race in Argentina was “spineless”, after he initially stood for the boycott being organised over dangerous track conditions.

Thick dust and oil seeping through the El Villicum track surface has caused problems all weekend for riders, with “90 percent” of them agreeing not to race on Saturday after track conditions worsened in Superpole.

In Superpole, Ten Kate Yamaha’s Loris Baz was flicked from his Yamaha on an outlap and was ruled out of the race due to head pain.

Speaking to Eurosport, Laverty says race organisers acted “underhand” and went to the team managers to put pressure on the riders to race.

He was also hugely critical of Rea for turning his back on the protest, while branding race winner Alvaro Bautista as one of the “few fools” that wanted to race all along.

“We had agreed with the organisers that we would meet,” began Laverty. “[In FP3] it was better in cooler conditions, and then in Superpole it was treacherous once the temperature went up.

“So we knew that we would talk with them again, but suddenly they did something very underhand.

“They went and spoke with the team managers, put pressure on us all together to try and race and then we grouped together as riders and we had a good 90 percent of the riders all together, and that was sorted before the race, stood in our clothes.

“There were always going to be a few fools that want to ride, and there were a couple of guys like Bautista and [Michael Ruben] Rinaldi that wanted to ride for whatever reason.

“So, there weren’t many riders who didn’t want to. And [I’m] really disappointed in Jonny Rea, he is our representative as the world champion.

“He needed to have more backbone, he made a very spineless decision to go and race and he let us down a bagful, and it’s something I’m going to have to speak with him about afterwards.” 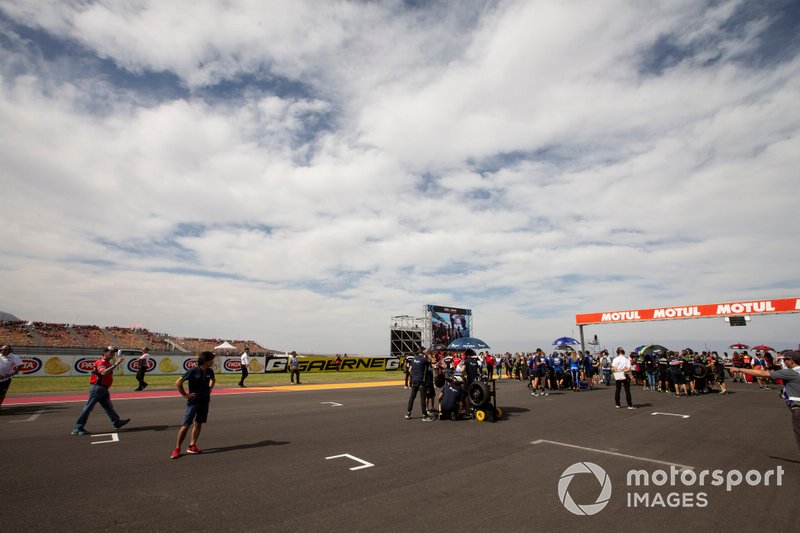 “He had massive pressure from his team to go and do it, and he wasn’t happy to go and do it, but yet he’s lined up,” said Davies. “And he’s worth a lot more than all of us, he speaks for 10 or 15 of us. I’m just super-disappointed in that.”

Laverty insists this “little rebellion” was only for Saturday’s race, and pleaded with the organisers and Dorna Sports to hold two feature races on Sunday when conditions are cooler.

Late on Saturday, Laverty, Davies, Camier and Cortese all posted identical statements on social media reiterating the reasons for their decision to boycott the race and thanking their respective teams for supporting their position.

BMW rider Laverty out of Assen WSBK round due to injury