Laverty to skip three WSBK rounds due to injury 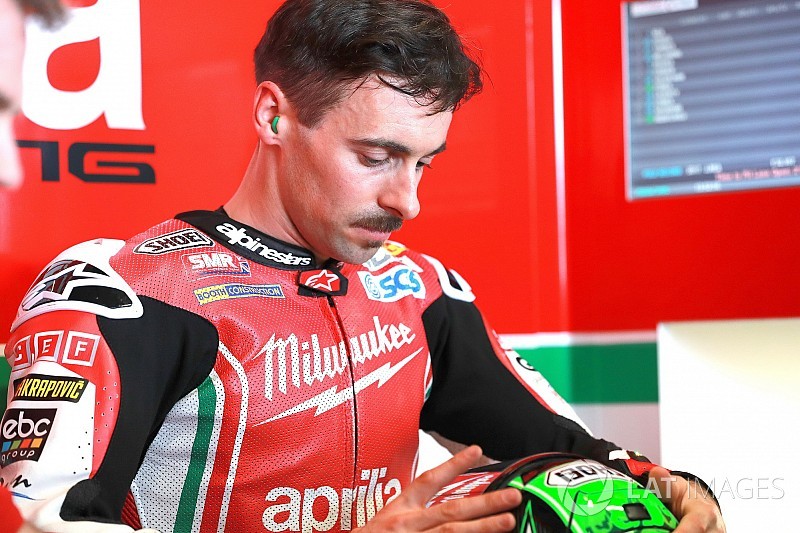 Eugene Laverty will skip the next three World Superbike rounds and aims to return to action at Donington Park after breaking his pelvis at Buriram.

The Irishman was involved in an incident with Jordi Torres on Lap 4 of the second Buriram race while the duo were fighting within the leading group.

Laverty was hit by Torres' MV Agusta bike and subsequently underwent an operation at the Bangkok hospital, after he was diagnosed with a broken pubic ramus.

The Milwaukee Aprilia rider has now confirmed that he will miss the next three WSBK rounds at Aragon, Assen and Imola, and plans to return for his home round at Donington Park at the end of May.

"Due to my internal injuries I will be restricted in the first month of my recovery but following that we will push hard to ensure that my pelvis heals and I’m aiming to get back on the bike at my home round at Donington Park," said Laverty.

"I'm obviously very disappointed that I will be forced to miss some races so early in the season but I count myself lucky that my injuries are not worse.

"The initial fear of lying on the ground and not being able to move my legs was something that I’ve never felt before.

"I’m very fortunate to have a fantastic group of people around me from my wife Pippa, my brother John who reacted fantastically during the key hours after the crash, and the entire Milwaukee Aprilia team who joined me in the hospital to make sure that I was in good hands."

Laverty returned to WSBK with Aprilia last year after two seasons in MotoGP, and finished 10th in the standings.

He had two top-10 results in the first three races of the 2018 season before he sustained his injuries.

His withdrawal leaves his teammate Lorenzo Savadori the only confirmed Aprilia rider on the grid for the next three rounds, as the brand doesn't supply bikes to other teams.