Lowes clings to top spot on Day 1 in Phillip Island 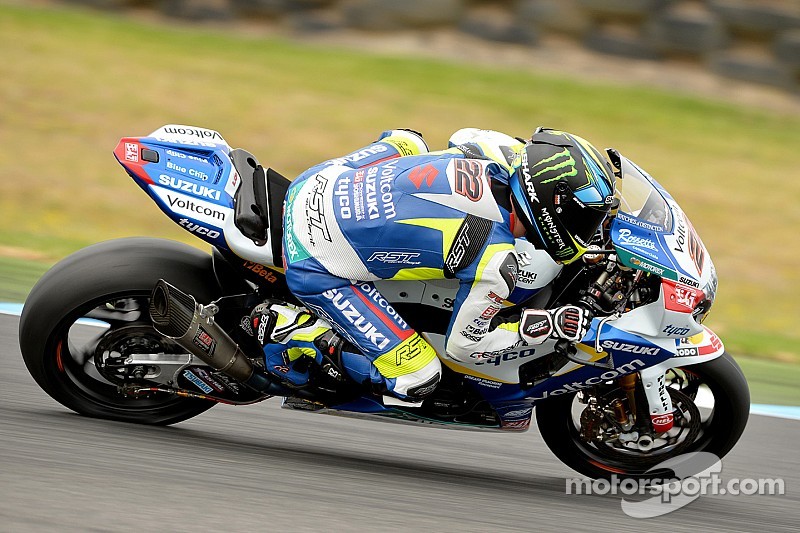 With just one session to go to decide the first Tissot-Superpole riders of the new 2015 WorldSBK season, Alex Lowes (Voltcom Crescent Suzuki) is the one that everyone is chasing after ending day one in Australia on top, courtesy of his FP1 time of 1.30.855s.

The British rider will head into tomorrow’s FP3 with a gap of 0.359s over Jordi Torres (Aprilia Racing Team – Red Devils) as the top 9 riders were separated by a second.

Third place in the overall classification after the opening day was Tom Sykes (Kawasaki Racing Team) one of many who were unable to improve this afternoon in the much hotter conditions. In fact only 3 of the top 12 riders were able to better their FP1 times.

Niccolò Canepa (Team Hero EBR) missed FP1 due to a technical problem, the Italian managed a couple of competitive laps before falling at turn 10. He will head into tomorrow in 20th overall.

Sylvain Barrier fell at turn 11 at the half way point of FP3, the Frenchman still fast enough to claim 13th.

Gabor Rizmayer (BMW Team Toth) was the unluckiest faller of the afternoon session as he sustained a left-wrist fracture and dislocation after crashing at turn 11. The Hungarian rider will undergo surgery tonight at the Knox Private Hospital.

Leon Haslam was the last to go down, the British rider losing the front of his Aprilia at turn 10.

Reigning Champion Sylvain Guintoli (Pata Honda World Superbike Team) was 12th, the Frenchman who improved throughout the final 45 minutes was lucky not to crash after saving what would have been a huge highside.

Troy Bayliss (Aruba.it Racing - Ducati Superbike Team) found himself in 18th after his first 90 minutes of competitive World Superbike action since 2008. The Australian spending a lot of time chasing a set-up on his Ducati Panigale R machine, eventually elevating himself into the top twenty in the final seven minutes courtesy of four personal best laps in a row.

Wildcard riders Matt Walters (Team Pedercini Kawasaki) and Jed Metcher (Race Center – Demolition Plus Kawasaki) eased themselves into the weekend posting the 16th and 19th times at the end of the opening day.

After FP3 in the morning, 20 riders will progress into the Tissot-Superpole sessions with 10 places on offer for the fastest ten riders after the times from FP1, FP2 and FP3 are combined. As it stands Leon Camier (MV Agusta Reparto Corse) sits in 11th overall and will need to find at least 0.254s to move automatically into the Pole Position shoot-out tomorrow.