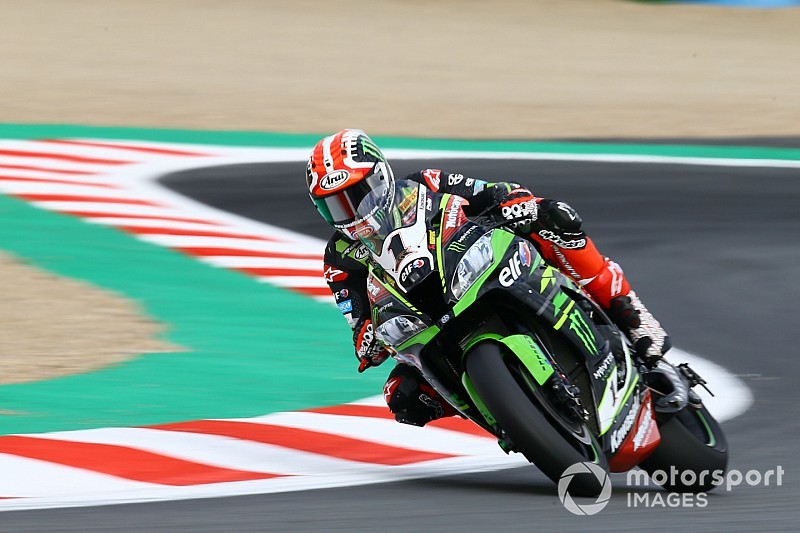 Rea, who could seal his fourth WSBK title this weekend at Magny-Cours, began the day with the fastest time of a red-flagged FP1, with a 1m37.202s set after a brief stoppage in the final two minutes because of a crash for Leandro Mercado at the final corner.

Already top of the timesheets before the red flag with a 1m37.621s, Rea was able to open up a gap of 0.522s over Sykes, while Michael van der Mark guided his Yamaha to third on the timesheets with a 1m38.110s.

Rea was unable to improve on his FP1 best in the second 40-minute session, with Sykes leading the KRT charge with a 1:37.403s to go a tenth clear of Milwaukee Aprilia's Lorenzo Savadori, while Rea was third.

Marco Melandri had to sit out the first session due to a technical issue with his Ducati, but was able to get into the action in FP2 and was eighth quickest, with teammate Chaz Davies three tenths adrift in ninth.

Rea set the early pace in the day's final practice with a 1m37.392s, which he soon improved to a 1m37.247s, with Sykes and Davies shadowing him.

Improvements on the combined standings were few and far between until the closing moments, when a flurry of fast laps set the entry list for the second part of Saturday's Superpole session.

Rea and Sykes did not improve on their best efforts from FP1 and FP2 respectively, but held onto first and second ovreall, while Yamaha's Alex Lowes leaped up to third with a final lap of 1m37.489s.

Savadori was fourth-fastest and the sole Aprilia currently contesting SP2, after teammate Eugene Laverty – who suffered a small crash in FP2 – missed the cut by just 0.004s.

Lowes' sister Yamaha of van der Mark lifted himself out of the SP1 danger zone late on in FP3 with a 1m37.626s, with Michael Ruben Rinaldi put his Panigale sixth ahead of Ducati stablemate Davies, both of them posting identical 1m37.710s laps.

Melandri headed fellow Ducati runner Xavi Fores, who joined the Italian in suffering technical issues with his Barni Panigale on Friday, with the Spaniard forced to watch FP2 from the sidelines as a result.

Home hero Loris Baz was the rider to deny Laverty entry to SP2 with his FP2 la of 1m37.856s, while fellow French rider Jeremy Guarnoni – who is replacing the absent Yonny Hernandez at Pedercini – was 19th.

Their compatriot Matthieu Lussiana is a wildcard for this weekend, but failed to qualify after encountering numerous technical issues with Dreamteamcompany Aprilia across the day.